Anna Jay Out Up To One Year, Information On Samoa Joe’s Return

Anna Jay is out of the AEW's Women’s World Title Eliminator Tournament due to injury, update below. Also, will Samoa Joe return to the ring?

Seems as if Anna Jay may need surgery, and might be out of action for up to a year. Her injury update, below.

AEW is currently airing their Women’s World Title Eliminator Tournament on YouTube; however, Anna Jay won’t be participating in it. She suffered a shoulder injury, and it sounds as if she’ll need surgery.

It’s expected that Jay will need at least six to 12 months to recover. Madi Wrenkowski will take Anna’s place in the AEW tourney.

Sounds as if Anna Jay suffered the injury while training.

Getting injured is never an easy thing for a wrestler, especially when participating in a tournament. With that said, it is part of the business.

Kenny Omega recently commented on Anna Jay’s injury and update, stating that getting hurt is the “nature of the beast”.

On behalf of everyone here at WNZ, we wish Anna Jay a speedy recovery so she can get back to doing what she does best.

Speaking of injuries, Samoa Joe has been out of action for a very long time now. He’s been a welcome addition to Monday Night RAW’s color commentary, but fans would love to see him back in the ring.

Will he ever return to the squared circle?

Samoa Joe suffered from a concussion that has taken him out of in-ring action for over one year now. Rick Ucchino of SK Wrestling recently had a chat with Joe about his possible return.

According to the WWE superstar, the WWE medical team is doing the best they can for his well-being and health. This means that he’s staying out of the squared circle for now, and they are taking their time. With that said, this doesn’t mean he’ll never return to action.

He added that the pandemic has “held up” a return, due to medical personnel availability. Joe noted that a careful and “measured” approach is being taken when it comes to his return to the ring.

Is Joe’s In-Ring Career Over?

During the interview, Samo Joe made it very clear that he does not think his in-ring wrestling career is over, not“by a longshot” as he put it. 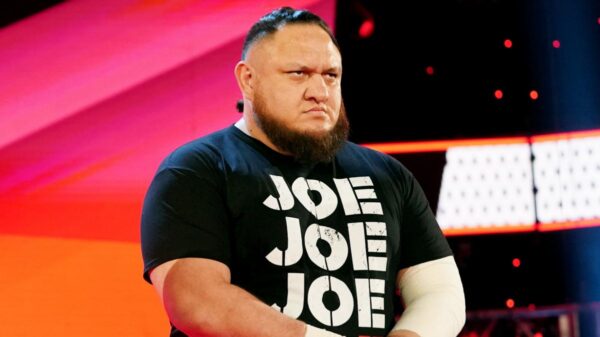 Joe revealed that he’s appreciative of this recovery time. He also was clear that his health has been respected at a “premium” by WWE medical, throughout this process.

There’s a good chance that Samoa Joe will wrestle again. It sounds as if he and the WWE are taking their time to ensure that he is in tip-top shape and fully recovered before he steps through those ring ropes.

Concussions can be a tricky thing to recover from, so it’s clear the WWE is not taking any chances.

Joe suffered from this injury on February 20, 2020, while hitting his head during a film shoot for a commercial. Four days later he would be suspended by the company for 30 days after violating their Wellness Policy.