Alexa Bliss is dealing with a scary situation on Twitter, and Nia Jax had a huge moment on RAW last night that has been censored.

Alexa Bliss is currently dealing with an overly obsessed fan on Twitter. Meanwhile, the WWE censored a moment during last night’s RAW that involved Nia Jax in a match with Lana.

Alexa Bliss’s new WWE character linked to the Fiend has offered fans some creepy moments. Sadly, the superstar is dealing with creepier moments in real life.

Bliss has a fan that has been sending out some threats to her on Twitter. They are disturbing, to say the least.

The good news is that Alexa has reached out to the authorities about the fan. The Orlando Police is aware of the situation.

Here’s hoping they are on it. The bad news is that he has been sending unsettling messages to her for a while now.

Using the Twitter handle Albert Little 666, the fan has stated he is in Orlando. He’s also mentioned that he plans of visiting Bliss at her home.

Last night, he posted a number of tweets wondering where Alexa was, as she did not appear on RAW.

Sadly, threats have also been made to Alexa’s fiance, Ryan Cabrera’s life. Some o his posts can be found below:

Hey @AlexaBliss_WWE I'm going to have to apologize for what happens when I arrive in Orlando, Florida so much pain not enough love. @RyanCabrera is in our way we have shown him who is boss, oh and one more thing is afraid.

Ryan Cabrera your a kidnapper and rapist who stole my wife Alexa bliss and think you're not going to pay for this oh your going to pay. Alexa bliss, I heard that he is abusing you evening more with that Instagram story I saw @RyanCabrera I'm not finished with you.

Alexa bliss where were you baby, I didn't see you on #WWERAW that kidnapper and rapist Ryan Cabrera better not have something to do with this.

Here’s hoping that this situation can be diffused before anything terrible happens. Back in August 2020, WWE superstar Sonay Deville also had an incident with a fan where the man entered her home.

Thankfully, no harm was brought to Sonya, and she returned to SmackDown after a hiatus, earlier this year.

Speaking of Monday Night RAW, fans who watched the Red brand were treated to a funny moment after Nia Jax took a hard bump. Sadly, that moment has now been censored. 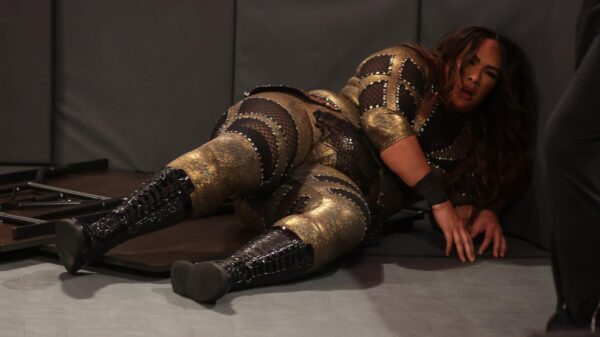 For fans that missed Monday Night RAW, Lana had a big win over Nia Jax last night that saw the “Irresistible Force” take a massive bump on the hard part of the ring. Nia exclaimed “MY HOLE” after she fell, which ended up trending on social media.

It was funny to watch, and the WWE didn’t censor her statement during the match. They did end up nixing the statement when the video landed on their YouTube channel.

There’s a feeling that after the “dust settled” WWE management might not have been overly keen on Jax’s statement, after all.

It was an entertaining match, and a great way to end this “David versus Goliath” storyline. We’ll see what roles around this upcoming Monday.

Reaction To The Bump

As mentioned before, #MyHole was trending on social media last night. It was a comedic moment and a great win for Lana.

While fans reacted to Nia’s bump and exclamation, others in the wrestling world did as well.

Mick Foley stated that he expects to see t-shirts released soon. While the Bella Twins, Naomi and more also chimed in below.

I’ve been receiving a HOLE lotta love, much obliged #myhole

Meanwhile, Miro, Lana’s husband, and Lana herself also offered some interesting tweets to celebrate the big win. Here’s hoping Lana has more to big outcomes like this in the near future.

Nia finally got the push she deserved! Way to go WIFE @LanaWWE