When Vince McMahon does fly, he has some strange rules and here's the newest. And, there is talk of turning two popular NXT names heel.

Vince McMahon has plenty of strange rules, including no sleeping in his jet unless he passes out first. Also, WWE is looking to turn a popular NXT duo into heels and people are questioning the decision.

Reason Not To Fly With Vince McMahon

Vince McMahon has spent his entire life surrounded by pro wrestling. There are plenty of stories to tell about the WWE boss, but some of the best are those personal ones.

While speaking to Chris Van Vliet, Jonathan Coachman got on the topic of Vince. He discussed how the two would fly regularly on Vince’s private jet the day of pay per views.

Riding around on a private jet did not live up to the hype if Vince was awake. Apparently, there was an unspoken rule that nobody could sleep unless Vince had already passed out.

“So I would fly on his private jet all the time,” said Coachman. “People used to think it was great, but it sucked because you could not sleep unless Vince slept.”

“And Vince, that was the only time of the week that he would drink. He loves red wine.”

“So you’re over Nebraska somewhere, flying back to New York. You’re dead tired, and you’re flying.”

“You’re like, ‘You got to be kidding me, I can’t sleep right now?’ You couldn’t. Not allowed.”

This is not the first time we have heard stories of Vince being upset at random actions. He apparently is not happy when someone sneezes by him and this was before COVID.

When you can afford a plane and the ride is free, sometimes the best option is to just be quiet. Otherwise, there is always a screaming baby waiting for you on a packed plane of strangers. 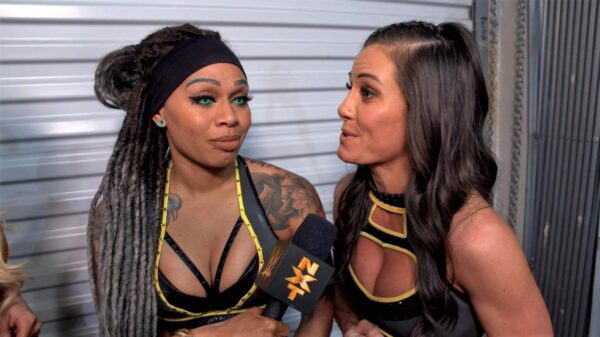 This year, WWE is doubling the size of the Dusty Rhodes Classic Tag Team Tournament. Previous years have seen only seen male superstars, but women are getting a shot this year.

Despite Catanzaro & Carter being popular with the audience because of their unique moves, WWE is going a different direction. During Wrestling Observer Live, Bryan Alvarez noted how they are set for a heel turn.

“Then they went back and they celebrated and talked about how they are going to win the Dusty Classic and they were all confident,” said Alvarez. “I was told that was supposed to be the beginning of a heel turn for Kacy Catanzaro and Kayden Carter.”

“I can’t believe it and I cannot believe this. So, I am praying that if this is true then some time in the next week cooler heads prevail and they make this right.”

Catanzaro is best known for being the first female to complete the City Finals course on American Ninja Warrior. Also, she goes out with RAW’s Ricochet and is just as agile as him.

Carter has been with WWE for two and a half years now and trained at the Team 3D Academy. Like Catanzaro, she is still new to the pro wrestling business.