Before Hollywood, Matthew McConaughey was a kid who spit on King Kong Bundy. And, Retribution didn't sign great WWE contracts.

Matthew McConaughey knows how to have a good time, but he probably took it too far when he spit on King Kong Bundy. Also, WWE’s offer to Retribution was on the low side.

Matthew McConaughey is one of the top names in Hollywood. Before becoming famous and cashing huge paychecks, McConaughey was like most kids his age.

Growing up in Texas made McConaughey a fan of pro wrestling. Back then, World Class Championship Wrestling was the main promotion in the area and the actor went to their shows.

In an interview with Maria Menounos, McConaughey spoke about his time as a fan. Apparently, he had no issue trying to rile up the heels.

“He looked me in the eye and got seriously pissed off and scared the heck out of me after I did it. And I took off running and they caught me and kicked me out for the second time that night.”

“I brought a paper bag full of old, mushed tomatoes and Skandor Akbar comes out and I’m just pelting him. And that was all great until they started really connecting.”

“Then the security found me and they kicked me out. “Then I climb through this little bathroom window at Hirsch Coliseum and got back in and spit on King Kong Bundy.”

Retelling the story had McConaughey laughing.

Nowadays, throwing objects or spitting on talent would have someone removed from the arena. Also, they would possibly face punishment from the law.

But, that was a different time when people actually believed the heels were really bad. If the late Bundy ever got a hold of McConaughey, he would have probably squashed him with ease. 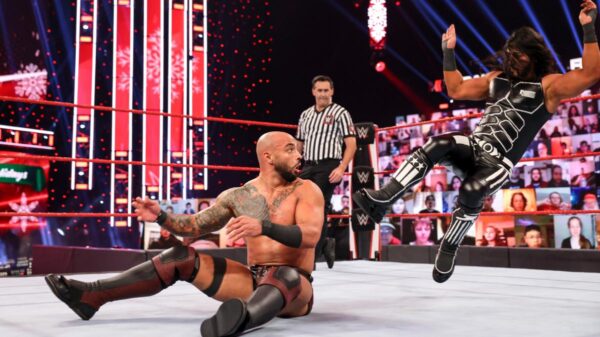 Over the summer, WWE spent months teasing a new stable. In the end, they called the group Retribution.

Most notably, they are known for wearing masks and causing chaos. But, the group has done little to impress fans.

According to Fightful Select, each member of Retribution signed three year deals worth $250,000 each per year. Therefore, T-Bar, Mace, Slapjack and Reckoning are making significantly less than other names promoted through NXT.

As for their leader, Mustafa Ali, he has his own contract that is considered a much better deal. Originally, Ali was not part of the stable as WWE was booking everything on the fly.

The low contracts are likely because of COVID. Before the virus, WWE was handing out large contracts for three to five years to keep talent away from AEW.

Now, WWE has to be more careful how they spend money. While they did not have an awful 2020 financially  speaking, they did lose money.

No live events or fans meant there were no tickets sales. Although, the company did well in merchandise thanks to the internet.

Eventually things will start to return to normal. At that point, WWE might offer Retribution better deals.