Lars Sullivan and his latest TV absence has fans wondering if he's one again in a bad place. And, a NXT superstar needed surgery last week.

After over a year, Lars Sullivan returned to TV in October. He looked the same, with some new facial hair.

Sullivan was still being pushed as a major monster. He scored a few wins, but has not been seen on TV for about a month now.

According to the Wrestling Observer Newsletter, Vince McMahon made the call. He sees Sullivan as a major heel, but SmackDown already has one in Roman Reigns.

Therefore, “The Freak” was taken off TV for the time being. While there is no return date, WWE will likely wait until at least TLC passes.

So far, Sullivan’s run in WWE has been bumpy. Just when you think it cannot get any worse, his past bites him.

Initially, Sullivan was set for a major push that would result in a WrestleMania match with John Cena. Anxiety issues cancelled that plan the day he was supposed to debut on the main roster.

Eventually, he would tackle that obstacle but more problems would arise.

Older comments from a bodybuilding website were revealed. They contained racist, sexist and homophobic comments.

WWE did nothing as Sullivan did not violate any rules or laws, but it got people talking. Specially, because of Sullivan’s past comments.

Of course, Sullivan’s first run on the main roster was not smooth. He wrestled one match and then suffered a knee injury.

McMahon sees something in Sullivan, otherwise he would have already fired him. But, if Sullivan remains off TV for months, there could be more to the story. 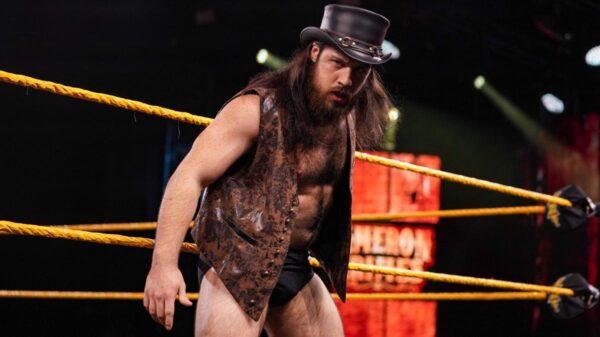 NXT will be short a superstars for at least a month. Cameron Grimes is currently out with an injury.

During last week’s NXT, he took a beating from Tommaso Ciampa and then Timothy Thatcher got involved. Thatcher focused on the leg, appearing to snap it.

Ciampa’s rival Timothy Thatcher sat at ring side to observe the bout. Towards the end, Tyler Rust appeared but was quickly taken out by Ciampa.

Grimes yelled at Thatcher post-match, which earned him an attack on his ankle. pic.twitter.com/ZvnKtkkBl4

— This is Sports Entertainement (@SEWrestlingNews) December 10, 2020

Now, PWInsider reports that Grimes underwent surgery last week. There was no word on the injury, but he will be out between four to six weeks.

As for Ciampa and Thatcher, they recently met at NXT Takeover WarGames. Ciampa emerged victories, while WWE teased a possible team between the two.

At the same event, Grimes took on Dexter Lumis in a strap match. Lumis won in what was likely the end of their feud.

Grimes, who found success in Impact Wrestling, was just starting to gain some traction in NXT. While he is out, hopefully it is only a minor setback.

There are reports going around that NXT Superstar Cameron Grimes is out with an injury for the next 4-6 weeks. PWJ would like to wish Grimes a speedy recovery! #NXT pic.twitter.com/9vMFJlXHmK