Former WWE superstar Kurt Angle opted against making a return to the promotion due to money, but Renee Young will be back on SmackDown soon.

Kurt Angle passed on an offer from WWE to return due to the lowball money offer. Also, Renee Young will make a return to SmackDown later this month.

Despite being offered a position back with the WWE, former superstar Kurt Angle is happy with his current situation.

Angle was one of many released by the promotion this past April after the novel coronavirus pandemic hit hard. That forced the Olympic gold medalist to dive head-first into other things in his life.

In an interview with PW Insider, Angle stated that he was offered a spot to work as Matt Riddle’s manager. This would have come on the heels of his position as a backstage producer following his retirement from active competition.

“Two reasons,” Angle said. “One was my company I started needed my attention 100 percent, especially with the virus thing and I had to just be there for the company. The other was the money.

“It just, it wasn’t enough. I wasn’t going to manage somebody for the amount of money they wanted to give me.”

However, Angle’s budding health foods market is taking up too much of his time to focus on anything else for the time being.

I had to take a picture of 3 of my favorite things all together… my wife, milk and delicious #ChxnSnx crispy protein bites. Gotta Love Fridays. Order Chxn Snx at https://t.co/ldxeFzhR3t #### WIFE NOT INCLUDED #### #itstrue @physicallyfitnu pic.twitter.com/NlEMhQjk7T

Pairing Angle with Riddle definitely would have been an interesting duo. Both have backgrounds away from pro wrestling, as Riddle competed for several years in mixed martial arts for the UFC.

Do not be surprised if Angle eventually returns to WWE. Meanwhile, he could always sporadic appearances for a quick check.

In conclusion, it would appear as if Angle is content and happy with his decision to remain away from the WWE. 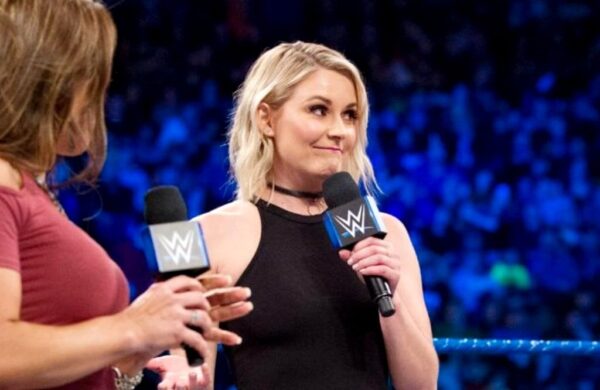 Renee Young’s time away from the WWE will be short-lived.

Young, who stepped away several months ago from the promotion, will return as part of the two-year anniversary of SmackDown on FOX.

A special SmackDown Kickoff pre-show will air Friday, October 16 at 7:30 p.m. ET and feature Young along with WWE Hall of Famer Booker T as co-hosts. Superstars and other special guests will be part of the event.

Pretty sure it said Renee Paquette was doing it. She’s way better, that Renee Young chick was over rated. 😜 https://t.co/ZscgT4mBsr

The event takes place live from the WWE ThunderDome at the Amway Center in Orlando. The second season of SmackDown premieres at 8 p.m. ET.

Along with the pre-show special, a “Best WWE Moments of 2020” will air on Sunday, October 11 during FOX’s NFL coverage. Some will have the broadcast air at 4:30 p.m. ET following early-afternoon games with others being able to catch it at 3 p.m. ET before late-afternoon games kick.

The 35-year-old Young worked as a commentator, presenter and interviewer in the WWE from 2012-2020. She appeared on Total Divas and is a former sports broadcaster for The Score Television Network.

She made history several times at the announce table, breaking boundaries for women. Later, Young would express how she was not a fan of her time as a full time member of the RAW announce team.

Young and Jon Moxley, who now competes for All Elite Wrestling, have been married since 2017. Therefore, people believe she will join AEW once her noncompete clawed expires.

Saraya Is Cleared For AEW Action, NXT Faction Getting Call-up