Rising AEW star Abadon was rushed to the hospital after a big injury the latest details. And, the reason WWE got rid of the Shorty G name.

At the recent AEW taping, there was a big injury suffered to Abadon. While details are still coming in, here is what we know at the moment.

Also, SmackDown saw Shorty G be no more. Instead, fans will get to see Chad Gable.

All Elite Wrestling (AEW) taped the next episode of Dynamite this week. During the taping, Abadon took on Tay Conti.

We are not sure what exactly happened, but there was a scary moment. It resulted in Abadon being hospitalized.

During the Wrestling Observer Radio, Dave Meltzer mentioned how the belief is Abadon took a blow to the neck.

“The Abadon thing I don’t know but she was hospitalized and it was serious,” said Meltzer. “She will make a full recovery, and I don’t even know what it was for sure.”

“The impression is she got nailed in the throat, but I’m not even sure if the match is airing on television or not. But, I’m thinking that it’s not.”

AEW has been promoting the match since Wednesday. They have not publicly discussed what happened during the tapings.

The past week has seen AEW deal with some injuries. During the last episode of Dynamite, Dark Order’s Alex Reynolds and Fenix were injured.

Reynolds was knocked out cold after a leg drop across his head. As for Fenix, there is no confirmation what happened, but he was involved in a hard fought battle against his brother.

AEW already confirmed that Fenix is out of the tournament to name a new number one contender. He is being replaced by Pentagon Jr.

Then, there is Matt Hardy, who took a scary fall at the last pay per view. He is medically cleared, but not before smashing is head against the concrete floor following a 15 foot fall.

AEW is very cautious how they handle injuries. Therefore, they pull talent if their doctor believes someone is too hurt to continue. 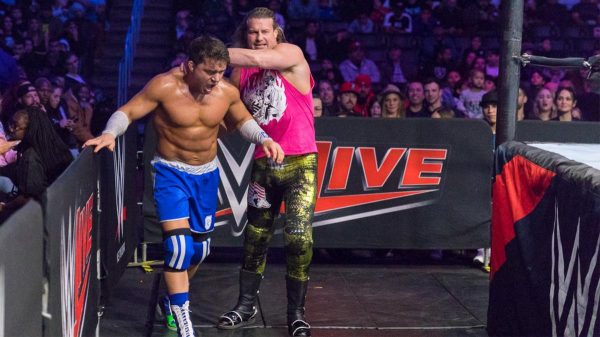 SmackDown saw a big change for one superstar. After getting destroyed by Lars Sullivan, Shorty G had enough.

In a backstage segment, he decided to back and use the name Chad Gable. That was the name he used for WWE until about a year ago.

Shorty G is no longer.

In the finals of the King of the Ring tournament, Baron Corbin defeated Gable. Afterwards, Corbin started calling him Shorty G to mock his height.

At the time, Gable was getting a decent push on SmackDown. Although once they switched to the Shorty G name, his push quickly ended.

With Daniel Bryan know having a say about SmackDown’s creative direction, he pushed for the change. Eventually, Vince McMahon listened and we will have to see what the results are.

Gable is best known for his roles in NXT and the main roster in the tag team division. He held titles on all three brand with the likes of Jason Jordan and Bobby Roode.

Based off his social media comments, Gable is digging the change.

So say goodnight to the short guy! The last time you’re gonna see a short guy like this again, let me tell you. ⁣
⁣#HisNameIsGable pic.twitter.com/HMDfwMIxA9