Michelle Waterson Vows to Keep “Chipping Away” in Title Run

Michelle Waterson ended a two fight losing skid at UFC Vegas 10, and the strawweight says it's the first step in resuming a title shot run.

Michelle Waterson needed five rounds to do it, and she absorbed numerous hard shots, but the veteran fighter believes she’s on her way to securing a title shot. 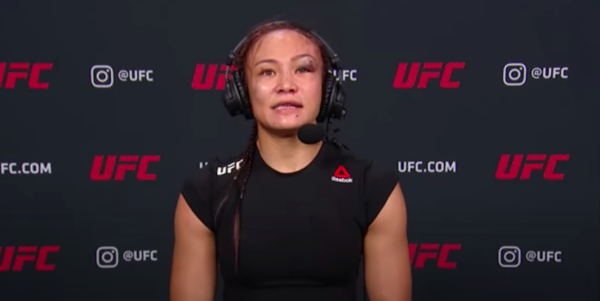 Waterson sees the “light at the end of the tunnel”

The 34-year-old took on Angela Hill in the main event of UFC Vegas 10, and the strawweight contenders went to war for 25 minutes. After the thrilling battle, which could have gone either way really, Waterson was awarded the split decision win.

The victory ended Waterson’s two-fight losing streak, as she was coming off decision defeats to former champs Carla Esparza and Joanna Jędrzejczyk. As a result, the rugged fighter believes she’s taken the first, pivotal step in resuming her title shot run (quotes via MMA Junkie).

“The goal has always been to fight for the belt,” Waterson said. “I’ve been chomping away at this for a really long time, and I want to get there.

Waterson probably needs to defeat a couple more top contenders before she gets tapped for a title fight. But you can understand why she believes she’s on her way.

It will be interesting to see who the UFC books Waterson to fight next. Heading into this weekend’s action, Waterson was ranked #8 in the UFC’s strawweight division and Hill was #8.

So, maybe the UFC will book Waterson to face a top-five ranked contender next?

Waterson comments on the slugfest

Although Jackson-Wink MMA fighter was bloodied and bruised in the memorable bout, Waterson could be seen smiling more than once. While talking about her reactions in the bout, and the fight itself, she said this.

“It’s a fight,” Waterson said. “This is what we love to do, and I think everybody has that within themselves. It’s like fight or flight.

Sometimes you just have to get hit to feel that way. Like ‘All right let’s go. This is a fight.’”

With Saturday’s win, Waterson moved her overall record to 18-8. Hill’s record dropped to 12-9.