Michelle Waterson and Angela Hill went to war in the headliner of UFC Vegas 10, and Waterson emerged from the thrilling bout with the win. 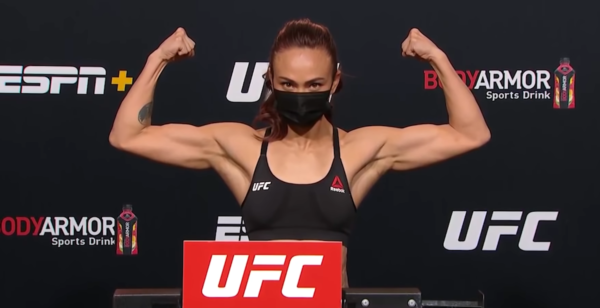 Hill came out pressuring and Waterson looked to counter. Waterson changed levels, looking for a single leg, but Hill quickly moved away. Moments later, Waterson clinched up and briefly had Hill again the fence. Hill planted a nice overhand right. Waterson looked for a leg again but Hill defended, and continued to move forward. Not long after, Waterson shot in again but Hill defended and they wound up against the cage. Waterson had swelling on her forehead and under her right eye. Hill threatened with an elbow and a kick before the round ended.

Hill continued to move forward in round two but Waterson scored with a nice counter right. Hill fired in right hands and front kicks and Waterson missed with a takedown. Waterson landed with a sidekick but not long after, Hill tagged her with a hard right . Waterson grabbed a leg moments later but once again, Hill defended the takedown. Waterson planted a really hard right of her own late in the round and she came with a flurry of strikes afterward.

Hill scored with a couple of hard elbows late in the round and the swelling over Waterson’s left eye increased.

Both women kept a busy pace to begin round three. Hill scored with a hard jab that bloodied the nose of Waterson. Moments later, Waterson countered with a takedown and she was finally able to take Hill to the floor. Hill tried moving back to the fence as Waterson worked to pass Hill’s halfguard.

Hill almost got back to her feet but Waterson maintained the top position after a scramble. Hill threw an illegal upkick right before the round ended.

Hill tagged Waterson with a nice left hook not look into the round that wobbled the strawweight slightly. The action slowed somewhat, but both women continued to fire strikes. Waterson planted a hard right mid round. Waterson shot in for a double leg later in the frame but Hill defended. Waterson scored with a nice sidekick to the chin of Hill late in the frame. Waterson countered Hill with  a crisp left before the round ended.

Waterson went for a single leg not long into the final round, but once again, Hill defended. Waterson came forward behind kicks and jabs. Hill kept coming but Waterson countered well with blitzes and clinch attempts. Hill scored with a nice combo late in the frame, and Waterson responded with a spinning elbow. Hill scored with a right but Waterson followed up with several flurries. With seconds left, Hill fired in a series of knees. Outstanding fight.

Here are the complete results for UFC Vegas 10, which took place at the Apex Facility.