Following Colby Covington's win over Tyron Woodley, he received a call from U.S. President Donald Trump, while being interviewed by ESPN. 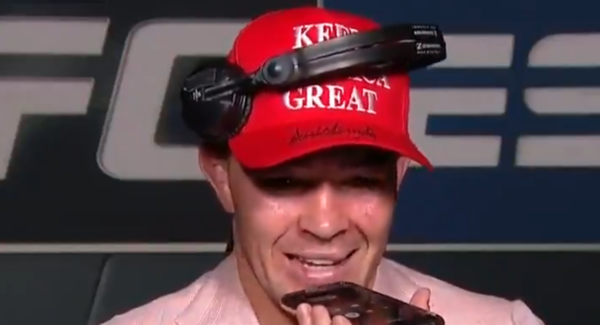 Covington faced Woodley in the main even of UFC Vegas 11, and his pressuring game had him ahead after four rounds. In round five, Woodley sustained some type of rib injury after being taken down, and the fight was called.

As Covington was being interviewed by ESPN, he received a call from U.S. President Trump, who told the fighter the following (quotes via MMA Fighting).

“You are a great fighter,” Trump said to Covington. “You make it look so easy. I don’t know how you do it. Congratulations, I wanted to watch that fight tonight. You were great.”

“That was easy work, relatively easy work. I’m proud of you,” Trump said. “I just made a big speech, I had 35,000 people, I said I want to get home now to watch Colby. That was fast work.

Covington, who is a vocal supporter of President Trump, said this.

“Thank you, Mr. President,” Covington said. “You gave me the dragon energy when you shook my hand on Sunday at your rally.”

During the cringe worthy exchange, Covington directed the following statements at Usman, who was born in Nigeria (quote via MMA Mania).

“Marty Fakenewsman, you got so lucky that last time, you know what happened two days before,” Covington said. “That was the worst fight of my life.

That was my worst night and that was your best night.

I’m coming for you again. You know who was winning that last fight. You’re on borrowed time, this is my time, I’m getting my belt back.”

You get a call from, frickin’, your little tribe? They give you some smoke signals for you? You’re a joke, Marty Fakenewsman.

Newsflash: you’re a joke. You’re fake news, no one cares about you. You’re pathetic. You got the worst decision in the history of the sport. So many bad calls against me.”

Covington’s comments regarding the “tribe” and “smoke signals” are being labelled as racist by some outlets and observers.