Ellen DeGeneres is in the public relations battle of her life. Her career, reputation, and brand are on the line and shock jock Howard Stern is giving her advice. The “King of All Media”, who once called Ellen DeGeneres a “tyrant ogre”, suggests the Emmy-winner roll with her new mean girl image and “just be a prick.”

The long-standing talk show host has made her image around kindness. Now, former employees and guests are blowing through that facade and detailing the hellish and toxic work environment on the set of “The Ellen DeGeneres Show”.

Racism, bullying, and sexual harassment are among some of the claims against “The Ellen DeGeneres Show”. Former employees have been coming out of the woodwork to drag the Emmy-winner and her eponymous talk show through the mud.

RELATED: Ellen DeGeneres’ Producers Panic – Say ‘It Would Break A Lot Of Hearts’ To Cancel The Show

Stern has a tremendous amount of experience dealing with accusations and the outrage patrol. That’s why he’s offering this advice to the comedian turned talk show host.

While loyal Ellen fans might be offended by Stern’s suggestion, they might want to hear him out. He is a master with deflecting from touchy situations. Of course, he usually does this by making things even more inflammatory.

The pair has history that goes back years – some friendly, some contentious.

In 2010, Stern ranted against DeGeneres after hearing that she was choosing to relinquish her role as an American Idol judge amid rumors that Stern would be joining the show.

He had this to say about her then:

“Ellen DeGeneres is such a jerk. She’s such a foul piece of garbage, people who work with her know…she’s a tyrant ogre, this whole nice girl image is a lot of horseshit fakery – she’s miserable, and she is a miserable woman.”

In 2019, Stern remarried his wife, Beth, on “The Ellen DeGeneres Show.” 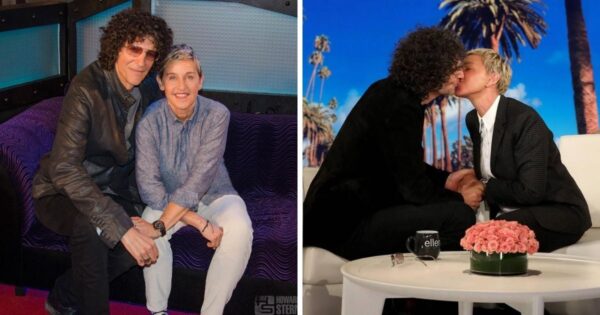 Stern appeared on “The Ellen DeGeneres Show” late last year. In October, Ellen was in hot water for sitting with George Bush. Cancel culture was coming for her for being friendly with a Republican.

RELATED: Howard Stern Just Turned The Tables On Liberals Trying To Use Blackface, N-Word Clip Against Him

At that time, Stern had advice for Ellen to distract from the controversy. He said that Ellen should kiss him and everyone will be too distracted to mention George Bush ever again. When you consider this tactic, it’s not too far of a stretch for Stern to tell Ellen to “be a prick.”

“Maybe I have to go back on Ellen’s show and kiss her.” ~ Howard Stern. pic.twitter.com/4UlSSCBVpB

You can watch this hilarious clip in the video below.