Fabricio Werdum has called for a rematch with Fedor Emelianenko. So is "The Last Emperor" and Bellator on board?

Now that Fabricio Werdum will enter the free-agent mark, there’s been some buzz about him fighting Fedor Emelianenko again. So, if “The Last Emperor” interested? And what about Bellator? 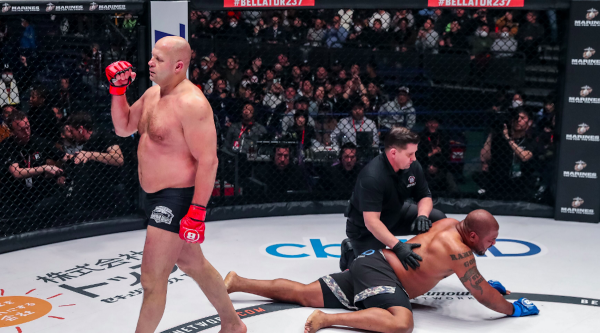 Fedor is down to fight Werdum again

If you’re an old school fan, then you know that Werdum shocked the MMA world in 2010, by becoming the first man in nearly ten years to defeat Fedor. Both stars proceeded to compete in the Strikeforce’s Heavyweight Grand Prix, feeding hype for a rematch, but they both incurred losses and it never happened.

Afterward, Werdum relayed that he wants to fight Emelianenko again, and he also noted a lot of people want to see the rematch as well. So what does Fedor think?

The Russian star is in Uncasville, Connecticut this week for Bellator 244, as his teammate Vadim Nemkov is fighting light heavyweight champ, Ryan Bader. When Fedor was asked about the possibility of fighting Werdum again, he said this (quotes via MMA Junkie).

“For myself, yes, I would like to fight him,” Emelianenko said. “Whether that’s a fight fans are interested in seeing or Bellator is interested in putting on, I don’t know that.”

Well, since Fedor is under contract with Bellator, obviously the promotion would have to sign Werdum to make the rematch a reality. When Bellator President Scott Coker was asked about the possibility of the fight, he said this.

“I love Fabricio, and it’s something really that’s Fedor’s decision,” Coker said. “One of the things I’m going to talk to Fedor (about) tonight is, ‘Is this an important fight for you?’

Whatever he says, then we’ll go make it happen.

If it’s an important fight to him, then we’ll probably put it together. If not, it doesn’t mean we won’t still pursue Fabricio.

So, it certainly sounds like Bellator could take steps to make the bout happen. One hurdle in making this bout happen, however, could be the COVID-19 pandemic.

Coker also said that he thinks it would be a “shame” to have Fedor’s last couple of fights not happen with fans in attendance.

Fedor hasn’t fought now since last December, when he took out “Rampage” Jackson in the opening round.