Daniel Bryan is pushing undercard talent as part of his new WWE gig. And, Kurt Angle wanted a final title run before he retired.

Thank Daniel Bryan for pushing talent that otherwise would not be featured on TV. Also, Kurt Angle wanted another major title run before he retired from WWE.

As reported, Daniel Bryan and Edge were given some extra work by WWE. Both now help the company on the creative side.

Bryan’s work can already be seen. He is looking to help mid card wrestlers be elevated.

This can be seen with the recent pushes of Metalik, Lince Dorado, Shorty G and Drew Gulak on SmackDown. Wrestling News went into further details about Bryan’s role.

“Bryan pitches a lot of his own ideas,” a WWE source told Wrestling News. “Sometimes Vince [McMahon] and Bruce [Prichard] will turn down an idea but a lot of the things he has pitched have been used on TV.”

At the end, McMahon has final say, but Bryan has never been afraid to speak his mind. With Bryan’s help and only some superstars working, a handful of  talented wrestlers are getting a renewed push. 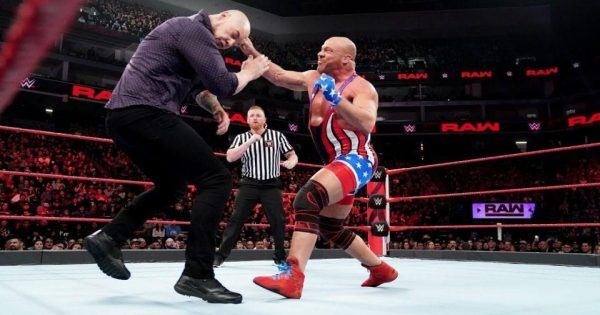 When Kurt Angle departed WWE the first time, he was at the top of his game. Many considered Angle the top wrestler on the roster, but he was struggling with addiction and did not want help.

Therefore, WWE let him go and he quickly joined Impact Wrestling. After a lengthy and impressive run there, he left.

The next year would see Angle work a limited schedule for Indy promotions. Eventually, in 2017, he would return to WWE as he entered their Hall of Fame.

Days later, Angle was appointed the General Manager of RAW. While helping run RAW, he eventually found himself working a limited in-ring schedule.

Looking back the experience, Angle was disappointed how everything worked out. He expressed his disappointment while speaking to Denise Salcedo on Instinct Culture.

Angle On Disappointing End To Career

“It didn’t go the way I wanted it to,” said Angle. “Vince McMahon had an idea for me. I think he was looking at me as a liability; someone that was addicted to painkillers, someone that broke his neck 5 times. So, I think Vince didn’t have the same idea I did.”

“When it was time for me to wrestle, I was doing the GM job for a year and a half; I was inactive, not bumping, not wrestling. My body started getting arthritic, my neck tightened up, my back, my knees.”

“Before I knew it, I got in the ring and I looked like an old man wrestling. And I knew that even though the company wanted me to continue to wrestle, I didn’t feel right about it for a couple reasons. One, I wanted to come back and have the title run, that wasn’t going to happen.”

Angle continued how he wanted to work with John Cena in his retirement match. Instead, McMahon went with Baron Corbin.

“I understood why, because they had spent a lot of time building up Baron Corbin and we had to have a match,” said Angle. “If I wanted to continue for another year, I could have got Cena. But, I didn’t want to go a whole other year. I knew I was done.”

When WWE let 40% of their employees go due to COVID-19, Angle was named. He was offered a role to manage Matt Riddle, but he turned it down.

Instead, Angle will focus his attention on his nutrition business and other adventures.