Video: Enraged Marvin Vettori Needs to be Held Back From Karl Roberson, After Fight Cancellation

Karl Roberson was forced out of a scheduled fight with Marvin Vettori today at UFC Jacksonville. But, based on video footage that's surfaced, it looks like Vettor was willing to go in the hotel lobby.

Some hardcore fans had a planned bout between Karl Roberson and Marvin Vettori on their must-see list for today’s UFC Jacksonville card, but, unfortunately, the fight’s not happening.

That said, due to a recent video that’s surfaced of an enraged Vettori confronting Roberson in the hotel lobby, the middleweights are still making headlines. 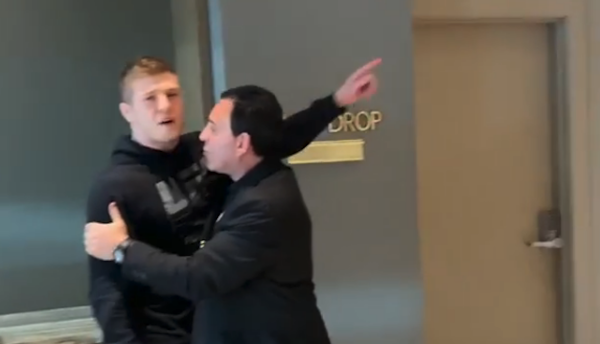 Vettori needs to be held back from Roberson

After Roberson came in heavy by 1.5 pounds for today’s card, it was ultimately announced that the middleweight is out of the fight due to medical issues. Here is the official statement (via MMA Mania).

“Due to medical issues unrelated to COVID-19 after his weight cut, Karl Roberson has been pulled from his Wednesday bout with Marvin Vettori at VyStar Veterans Memorial Arena in Jacksonville.

The UFC Fight Night card, headlined by the bout between Anthony Smith and Glover Teixeira, will proceed as scheduled with 10 bouts.”

As you can see by watching the video below, Vettori clearly wasn’t happy about this, or something else, as he needed to be separated from the middleweight.

Marvin just met Karl Roberson as he was leaving the hotel. He “kept that same energy”. #ufcjacksonville

Latest fight to be cancelled for Vettori

The 26-year-old Vettori (14-4) was also scheduled to fight Darren Stewart at UFC London in March. But the entire card was cancelled, due to the coronavirus pandemic. The Italian fighter is coming off a decision win over Andrew Sanchez in October.

Roberson (9-2) submitted Roman Kopylov in his last fight, which took place in November.

Hopefully, this match-up can be rebooked for another upcoming, UFC card.