Early on, it looked like Glover Teixeira's winning streak was going to be snapped by Anthony Smith. But once again, Teixeira gutted it out, and came back to score another finish.

Glover Teixeira has long been regarded as one of the toughest outs in the light-heavyweight division, and the 40 year-old demonstrated that again tonight at UFC Jacksonville, against Anthony Smith. 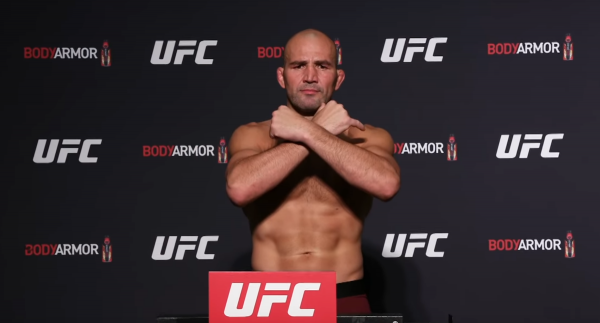 Smith planted another right while working behind his jab. Teixeira started firing in some leg kicks. Smith chucked a hard head kick that Teixeira blocked. The latter changed levels but didn’t follow through with the takedown. Smith continued to stay busy with front kicks but Teixeira continued to move forward.

Teixeira scored with a left not long in and Smith came back with jabs. Teixeira planted a thumping leg kick. Teixeira had a nice flurry but then Smith outscored him with kicks and punches for a couple of minutes. Teixeira’s left eye started to swell up quickly, but then he came roaring back with a vicious flurry. Smith ate several punishing shots before he started to fire back. Smith started to slow down and took a spinning back kick to the body. Great round.

Teixeira fired in a body kick not long into the round and the action momentarily went to the mat. Teixeira stunned Smith a huge right and then he sent “Lionheart” to the deck with a massive left hook. Teixeira started fired down shots from above and Smith gave up his back. Smith rolled back to face Teixeira and tried to roll out. With Smith on his knees along the cage, Teixeira fired in knees to the body. Teixeira started firing in left hands from the side while searching for the choke. Teixeira continued to batter away with hammer fists but Smith survived the round.

Smith’s right eye was swelling up as round four began. Moments into the frame, Teixeira cracked Smith with another huge uppercut. Smith countered with an elbow and both men chucked big shots. Teixeira, however, planted more punches and Smith shot in. Teixeira defended and took Smith’s back along the fence. Teixeira let a bloodied Smith back up and after tagging “Lionheart” with more punches, he took him down. Late in the round, Teixeira fired down several punches from above. Smith is looking battered. In between rounds, Smith could be heard saying his teeth are falling out.

Here are the complete results for UFC Jacksonville.