There is now a rumor killer on Sting either signing or working with AEW in the newar future. Also, Ric Flair has signed a new WWE contract.

Hold the breaks on the rumor that Sting is headed to AEW. Also, Ric Flair has signed a new WWE contract.

It appears as if the rumors of Sting appearing on All Elite Wrestling in the near future are just that, rumors.

According to a report by Pro Wrestling Sheet, Sting is no longer under contract with the WWE. However, the hall of farmer could be looking to secure a merchandise contract with the promotion in the near future.

Reports had surfaced that Sting would be the one to present the first-ever AEW TNT title to the winner between Cody Rhodes and Lance Archer. Those two are set to meet at AEW’s Double Or Nothing pay-per-view event scheduled for May 23.

PWInsider, though, is reporting that those rumors are false.

Most of the rumors of the falling out between Sting and the WWE when Mattel removed a series of action figures of the wrestler.

It’s NOT SSSTTTIIINNNGGG! “Due to circumstances out of our control Sting needed to be removed from Legends Series 7. We’ll look to include this figure in a future wave if he becomes available to us again.” pic.twitter.com/qUmHr8DEPH

The 61-year-old Sting officially retired as a wrestler in 2016, following a WWE title match. Sting challenged Seth Rollins for the belt at Night of Champions, losing in just under 15 minutes.

Always wanted to step in the ring with @Sting

Just glad to see you getting a much deserved shot in @AEWrestling. https://t.co/3RRiHWqGFG

AEW Double Or Nothing Current Card

Along with Rhodes vs. Archer, who will be accompanied by Jake Roberts to the tournament final, other scheduled matches include MJF vs. Jungle Boy, Darby Allin vs. Colt Cabana vs. Orange Cassidy vs. Rey Fenix vs. one other in a Casino Ladder match for a future AEW title match.

The AEW title will also be on the line as Jon Moxley defends against Brodie Lee. 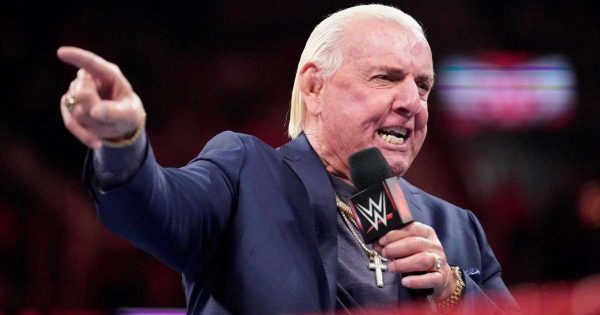 Despite seeing many faces head out the WWE door, Ric Flair will not be one of them.

Flair has signed a new contract with the promotion, according to a report by Wrestling Inc.

Late in 2019, Flair’s WWE deal was set to expire. However, “The Nature Boy” has since agreed to a new contract that will keep him with the promotion moving forward.

Flair’s most recent appearance came during the special Triple H 25th Anniversary Celebration on SmackDown in April. The relationship between Flair and Triple H has been well-documented over the years.

Ever the salesman, Flair continues to push his own site, posting a recent video of himself working out to stay in shape.

“By the way, available only at RicFlairShop.com. Wooo!”

The 71-year-old Flair is also enjoying life with his fifth wife, Wendy Barlow. The two were married in 2018.

Flair has also been battling some health issues over the years, most of which have come from years of alcohol-related drinking while traveling on the road as a pro wrestler.