Drew Gulak's WWE departure came as a surprise as he had been heavily featured in recent storylines. Also, here's the reason for a big face turn on RAW.

In a sudden move, Drew Gulak’s WWE departure left fans shocked. Plus, WWE was forced to make Asuka a face.

Last month, fans and WWE staff learned some unsettling news. Due to COVID-19, 40% of employees were being let go.

Now, we can add Drew Gulak to that long list of names. His name has officially been moved to the alumni section of WWE.

Although, Gulak was not released. According to PWInsider, Gulak’s contract was up and it was not renewed.

WWE made Gulak an offer, but they were not able to come to terms on a new deal. Regardless, he has no 90-day non-compete clause and can work for any promotion effective immediately.

Seeing how social distance is still be practiced, there is not much in the form of pro wrestling. Right now, WWE and All Elite Wrestling (AEW) are really the only promotions producing content each week.

The departure does come as a shock. For the past few months, Gulak has been working with Daniel Bryan.

At the Elimination Chamber, Bryan defeated Gulak in a hard-hitting affair with some technical aspects. Post-match, both showed respect for the other.

The two would work together up until Gulak’s release. Towards the end, Bryan was playing the mentor role to Gulak.

On Friday’s SmackDown, Bryan once again defeated Gulak to advance in the Intercontinental Championship tournament. Therefore, Gulak’s final appearance was the loss to Bryan.

Almost always, Bryan and Gulak received universal praise for their work together. It is difficult to tell where the angle was going, but WWE seemed to have interest in Gulak.

Before signing with WWE, Gulak was known on the Indy scene for being a hard worker. Once all this COVID-19 settles down, he should be able to find work.

While in WWE, Gulak spent most of his career as a heel. During that time, he captured the Cruiserweight Championship for a brief period.

Drew Gulak being released sucks, he was just starting to really get momentum

His last moment in WWE on #Smackdown last night

All I want is Drew Gulak vs Zack Sabre Jr in a NJPW ring, technical wrestling at it’s true finest form. pic.twitter.com/OfBtl7IevX

Time for Drew Gulak to come to NJPW 😎 pic.twitter.com/fkO7B8EHWI

Hey @CodyRhodes. Bro, I love what #AEW has done, and have been one of its biggest influencers on YouTube. I understand business is business and you guys can’t find everyone a home but man, if there is room for a Drew Gulak after a 90 non compete, he would fit PERFECT with you 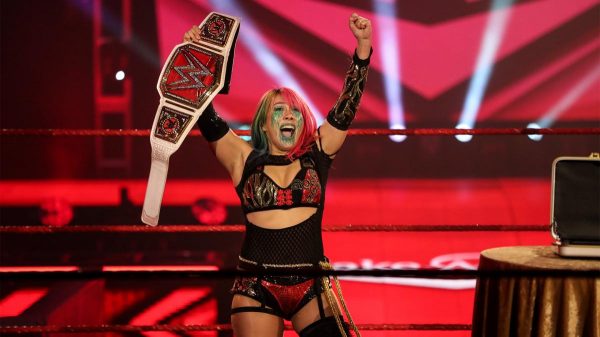 With Becky Lynch out of the WWE picture indefinitely due to her pregnancy, WWE needed to make some changes. In the end, they decide to make Asuka the top face on RAW.

Wrestling News reports that WWE did not have too many options on the RAW side.

“I asked about the turn and I was told that the Asuka and Sane turn was not something in the plans but it was necessary because they want a babyface champion right now with names like Shayna Baszler and Nia Jax in line for title matches in the coming months.”

If Lynch was still around, she would have continued her feud with Shayna Baszler. Also, a recently returning Nia Jax would find her way into the title hunt.

Apparently, WWE had been very pleased with work by the Kabuki Warriors. They were a handful of wrestlers who worked most of the recent shows out of the Performance Center.

With Asuka turning face, there is no word on Kairi Sane’s future. They could work as a face tag team, but Sane returning to Japan is not out of the equation.

In conclusion, with one segment on RAW, the entire women’s division was flipped.