The Undertaker and his wife Michelle McCool are helping to raise awareness about saving tigers and they look like they are enjoying themselves as well.

The Undertaker’s character is undoubtedly one of the most protected characters in WWE history. However, we have seen more of the Undertaker on social media lately. He’s also getting more visibly involved with charitable works, including a “Save The Tigers” project.

Save the TigerSave The World full video with @undertaker and @mimicalacool 🌎 🌎 🌎 The tiger stands as the last sentinel of the forest. If we lose the tiger, we will lose a piece of ourselves but if we could save the tiger we could save the world. For the tiger to survive it must have clean clear skies, pristine lakes and rivers plentiful prey animals, lush forests, wide open spaces and people who care. If we save the tiger we can save the world. 🌎 🌎 Today our Rangers are posted at Soryia Station deep in the jungles of Sumatra. Rangers that we employ are saving wildlife. Today with them we caught poachers, removed deadly snares, and did research for new solutions to wildlife crime.

Yes, you are reading it right. The Undertaker did a public service announcement alongside his wife Michelle McCool. Michelle is also a well-known, former wrestler. She was the first woman to win the WWE Diva’s Championship, so this message is bound to go around the world in a short time.

In the public service announcement, The Undertaker and Michelle McCool inform viewers about the danger tigers are currently facing. As you may know already, tigers are threatened with extinction. In the post, Taker and Michelle ask for everyone’s support.

It is lovely to see how two WWE veterans focus on charities that do not get as much attention as other charities. We need to protect our planet and the valuable resources it has left, including these stunning tigers.

The worlds largest cat and @kodyantle meet the @undertaker. Look at @zooinfo411 to see him run 40 mph. Look at liger liger.com for great liger info 👍✌🏻

The Undertaker Is More Active On Social Media

When you take a look at The Phenom’s social media, it is clear that Mark Calloway is coming through more. Up until 2018, he didn’t have a Twitter account. Now, he is using it more and more.

The Undertaker even broke character recently. While he is a company guy, he took to his social media to shame the WWE for forgetting Michelle McCool in their gallery of WWE women in history.

If there ever was a good time to break character, this was certainly it. So, good on him!

#Undertaker & @McCoolMichelleL had the opportunity to visit with Marines in Quantico, Virginia today, which was “the opportunity of a lifetime” for the Deadman! pic.twitter.com/apCm4WAZKe 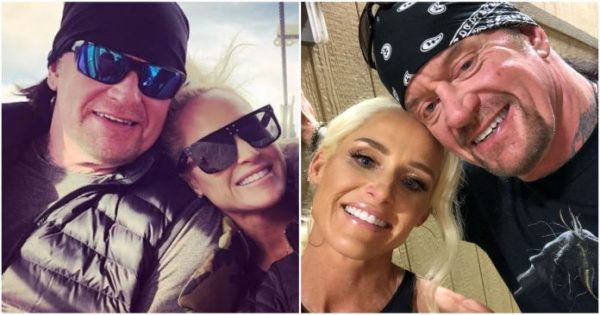 I love this blend between The Undertaker character and the man behind it. I also love seeing Michelle and Mark doing so much charity work. Given the status of Mark and Michelle in the wrestling world, they can pull lots of attention to countless charities. So, the increased exposure of both Mark and Michelle on social media is most certainly a good thing.

Of course, this does not mean we won’t get more Undertaker. In fact, he is set to take on AJ Styles at WrestleMania, providing it all goes through as planned.

AJ Styles even mentioned Taker’s personal life and his real name during promos, which makes this feud feel so much more personal. Both Styles and Undertaker are great at promos, so it is no wonder many people are looking forward to this particular match.

If you want more information about the tiger charity The Undertaker is currently promoting, you can head over to Myrtle Beach Safari. There are also other charities where you can gain more information including Save Tigers Now and Rare Species Fund. Even if you can’t donate, you can still help by simply spreading the word about the campaign on social media.