Scott Steiner Rushed To The ER After Collapsing At Impact Wrestling

Scott Steiner was rushed to the emergency room at yesterday's Impact Wrestling taping, after apparently fainting. We have the latest on his condition.

Scott Steiner Rushed To The ER After Collapsing At Impact Wrestling 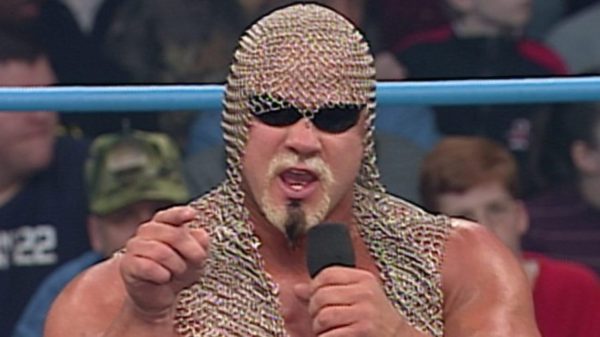 Some scary news coming out of yesterday’s Impact Wrestling taping. Scott Steiner was taken to the hospital after collapsing backstage. His condition was originally reported as serious, but he is apparently doing better. There is no word on what exactly caused Steiner’s medical scare.

As of now, there is no official statement from Impact Wrestling as a company. But, Impact Executive Vice President Scott D’Amore and Tommy Dreamer took to Twitter with an update.

For all concerned parties @ScottSteiner is OK.
His family is grateful for everybody’s concern and support.

There are unconfirmed reports that Steiner stopped breathing and needed his heart to be shocked. Again, this has not been confirmed and is purely a rumor at the moment.

The 57 year old was at the taping in Atlanta, Georgia, for the upcoming TNA throwback episode later in the month. It does not sound like he wrestled at the show. Instead, he was cutting promos and noting appeared wrong before he collapsed.

From everyone at Wrestle Newz, we wish Steiner a safe and speedy recovery. Stay tuned for more information on this developing story.

Really thankful to read that @ScottSteiner is aparently doing better after collapsing backstage a few hours ago. Thank you for the update @ScottDAmore

Wishing Scotty the very best for a full and speedy recovery. Sending prayers to him and his family. https://t.co/hJnzRhx3vV

Only love for Scott Steiner may you recover at God speed to only perfect health,Gods got you my brother HH

Hope Scott Steiner kicks out of this one. We pulling for you dude.

I was at Wrestlecon last year. Several rooms filled with legends of this business, The Horseman, Bret Hart, among others. I only had the money to meet one person and out of all those people I chose to meet Scott Steiner. Hearing that he’s in a bad way hurts me. PULL THROUGH SCOTT pic.twitter.com/VEQ9xEU9XI

Scott Steiner is in the thoughts and prayers of everyone at the National Wrestling Alliance.

We are pulling for you Scott! pic.twitter.com/KNrmf8b6iw

Get well soon Big Poppa Pump! So nice when I met him and always entertaining ! Holla, if you hear me ! #ScottSteiner pic.twitter.com/CPpbnyKIZE

Hard to believe a guy who eats healthy and works out clean like Scott Steiner would face a health crisis. Best to ya Big Poppa Pump. pic.twitter.com/XHHM1H1mZk

Hope Scott Steiner is doing ok this morning- good vibes going out to his family, friends and fans.

Hope Scott Steiner is ok, thoughts are with him and his family right now 🙏🙏