If you've been itching for some MMA action and entertaining action at that, Justin Gaethje's library of bouts has you covered. Case in point, "The Highlight's" championship winning performance at WSOF 8.

Justin Gaethje has long been regarded as one of the most entertaining and dangerous lightweights on the planet, and recently the Professional Fighters League shared out evidence as to why. 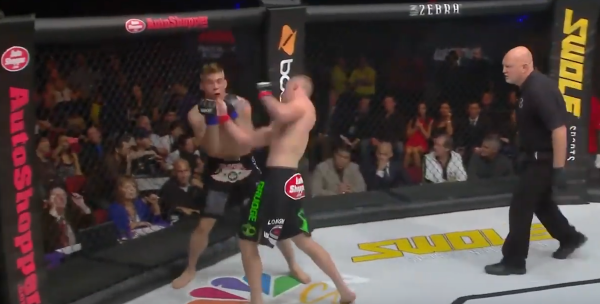 Gaethje joined World Series of Fighting back in 2013, armed with a record of 7-0. The decorated wrestler proceed to defeat Gesias Cavalcante, Brian Cobb and Dan Lauzon, before he was booked to fight for the lightweight title against Richard Patishnock in 2014.

As you can see by watching the video below, Gaethje came out firing on all cylinders, and proceeded to finish the fight with a series of vicious punches and standing elbows.

Gaethje went on to win six more bouts under the WSOF banner, before joining the UFC in 2017.

Due to the coronavirus pandemic, no one can say for certain, really, who is fighting who next and when. But, recently there has been some talk of Gaethje getting his wish, and facing Conor McGregor this summer. Gaethje believes there’s a good chance of the fight happening,but McGregor has not made any recent comments about fighting the contender.