Justin Gaethje continues to make the case that Conor McGregor needs to fight him next, and it looks like he thinks McGregor knows it too.

For a while there, it wasn’t looking like Justin Gaethje and Conor McGregor would end up fighting anytime too soon. But, as March nears its end, there’s been signs the match-up might happen and Gaethje’s noticed. 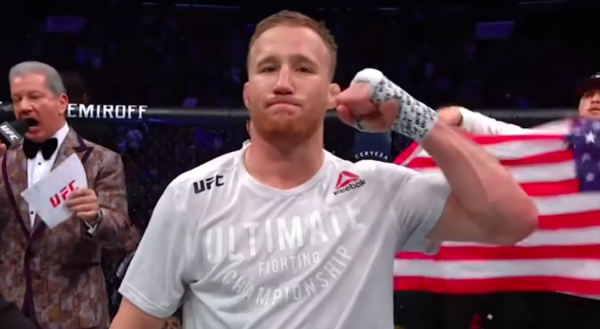 Gaethje has been pushing for a fight with McGregor for a while now, and not just because it would be a massive opportunity for him. According to Gaethje, and a lot of other people too, McGregor needs to beat the former WSOF champ before he gets another shot at the lightweight title.

But, after McGregor defeated Donald Cerrone in January, Dana White said that the star would face the winner of Khabib Nurmagomedov versus Tony Ferguson. Even though McGregor said at the time that he doesn’t want to wait out on the sidelines before that bout happens, talk about him facing Gaethje seemed to decline.

Fast forward to today, however, and that’s all changed. Recently there’s been reports that the UFC is looking at Gaethje – McGregor, and the latter’s striking coach, Owen Roddy, said the fight’s a possibility.

So, when Gaethje was asked by MMA Fighting recently about whether he thinks he’ll end up fighting McGregor, he said this.

“I think the chances are pretty good,” Gaethje said. “I think they’re really good. What’s crazy, whenever [Owen] Roddy did that interview, I don’t know what I was doing, I think I was golfing or something and someone told me to look on the internet and it was everywhere. It’s cool.”

So, it will be really interesting to see what happens here. Obviously, first and foremost, the UFC needs to find a way to operate in the face of the coronavirus pandemic, before any bouts take place.

Gaethje on why McGregor needs to fight him

While Gaethje likes his chances of a bout with McGregor materializing, during the interview, he also outlined why the star needs to throw hands with him.

“…He knows that if he fights me and beats me, nobody — Khabib [Nurmagomedov], Ali [Abdelaziz], whoever — can’t say much about him earning it or deserving the title shot. But until then, he ain’t going to get it.”

And that’s where things could get really interesting. Abdelaziz represents both Khabib and Gaethje, and he’s said that McGregor will not get a title shot (provided Khabib beats Ferguson) unless he beats Gaethje. So, what happens if McGregor or the UFC aren’t on board with that ultimatum?