Bret Hart recently told a story from the mid 1990s that involved a drunk Vince McMahon, strip club and eventually the police getting involved. 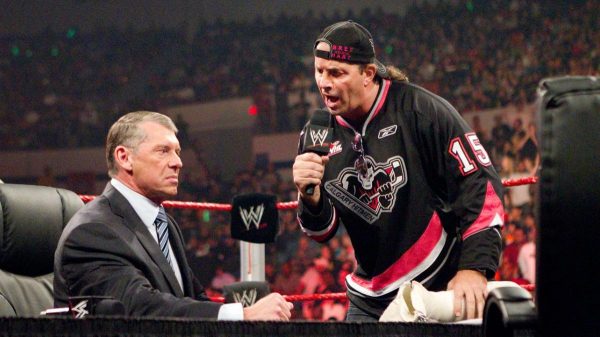 During a recent Inside the Ropes, they held a live show with Bret Hart. The WWE Hall of Famer shared many stories. One of those stories included Vince McMahon, several WWE wrestlers and a strip club.

The story takes place somewhere in the mid 1990s near a San Antonio airport. Bret, Owen Hart, Hulk Hogan, Jim Neidhart, British Bulldog, The Road Warriors, Brutus Beefcake and other wrestlers were there. Eventually, a very intoxicated Vince McMahon showed up with Pat Patterson and Sgt. Slaughter by his side.

“All of sudden Vince McMahon comes in, and I don’t know where Vince was because when we left him at the building, he was sober,” said Hart (thanks to Wrestling Inc for the transcription). “But, Vince shows up in this big strip bar. He shows up with Pat Patterson and Sgt. Slaughter as his security, I guess. He’s as drunk as I have ever seen him my whole life. He’s a mess. Vince is a total mess. He’s drunk, silly and laughing. His tie is all loose.”

Everyone was a having a good time. Then, The Road Warriors decided to hit their heir finisher, The Doomsday Device, on McMahon. After the other wrestlers egged them on, the Hall of Fame tag team nailed their finisher. But, they barely touched Vince

“Just when Hawk was gonna hit him with the clothesline getting ready to take his head off, he gave him this lame powder-puff, little clothesline that wouldn’t have broke an egg,” said Hart.

Not satisfied, Neidhart said the Hart Foundation could do better. So, Neidhart and Hart decided to give it a try. At that point, Hart admitted to smoking marijuana earlier with Owen and drinking Jack Daniels in the club.

“Jim picks Vince up,” said Bret. “Hulk Hogan was like, ‘are you gonna do it, or am I gonna have to find someone else to?’ I just looked at Hulk Hogan and looked at Hawk, and I just took off and clotheslined Vince full blast.”

Following the Hart Foundation, other wrestlers decided to hit Vince with their finishers. The police eventually arrived to help clear the building as the place was closed. Hart also mentioned how Sgt. Slaughter pushed a police car into a ditch.

And, that is just one of the many stories about the WWE locker room back in the day. Based off Hart’s comments, it sounds like McMahon did not care once he sobered up.

Of course, McMahon and Hart’s relationship went sour during the infamous Montreal Screwjob in 1997. It led to Hart leaving WWE on bad terms as he signed with WCW. It was not until January 2010 that Hart would get closure. He returned to WWE and would defeat Vince McMahon at WrestleMania 26 in his final match.

Since then, Hart continues to make random appearances on WWE TV. Although, Hart does appear for the other promotions. He was at All Elite Wrestling’s (AEW) Double Or Nothing pay per view last year. The two time WWE Hall of Famer unveiled the AEW World Championship.

Some of his family still works for WWE, such as Tyson Kidd and Natalya.