The resume in Olivia Jade's USC application is full of lies which could mean trouble in the college admissions scandal for her famous mom, Lori Loughlin.

Federal prosecutors released the resume submitted as part of the USC application for Lori Loughlin’s daughter, Olivia Jade, and it’s not a good look for the “Fuller House” actress who faces jail time in the college admissions scandal.

Lori Loughlin’s youngest daughter, Olivia Jade, boasted a list of impressive rowing accomplishments according to the resume in her USC college application.

The newly released resume even includes some impressive finishes and crew events in which Olivia Jade participated. She even bragged about gold medal wins. The resume of the shiny college prospect even declared that she “is highly talented and has been successful in both men’s and women’s boats.”

But, all of those achievements were lies. The application attempts to portray Lori Loughlin and Mossimo Giannulli’s daughter as an athlete in order to skirt the traditional admissions requirements for the in-demand university.

Reading this resume is unbelievable. The whole family are nothing but liars.

Despite what her resume claims, Olivia Jade never rowed. She claimed her sister was on the USC team. She was not.

Lori Loughlin and her husband, designer Mossimo Giannulli, are accused of forking over $500,000 to buy admission to University of Southern California for both of their daughters.

This is so damn insulting to every kid (including mine) that actually worked their asses off to get into college. I don't know how anyone in that family holds their heads up 🤬
Heres the lie-filled resume Lori Loughlin’s kid allegedly used to get into USC: https://t.co/6c6VAxLnqQ

Federal prosecutors released the documents below after Loughlin and Giannulli’s legal team demanded to see the fed’s evidence in the case. The prosecution claims this fraudulent resume helps prove the actress and fashion designer did indeed defraud the prestigeous college. While personal information is redacted, the dates line up to the admissions timeline for Olivia Jade. 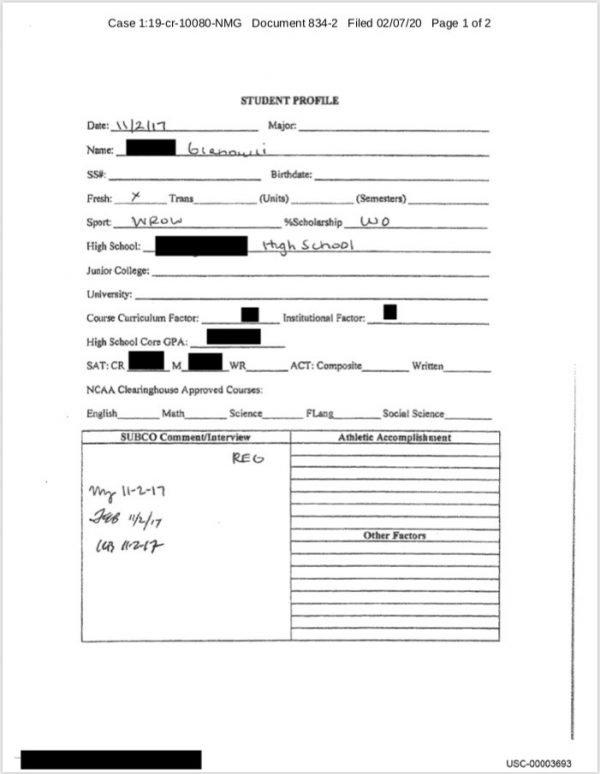 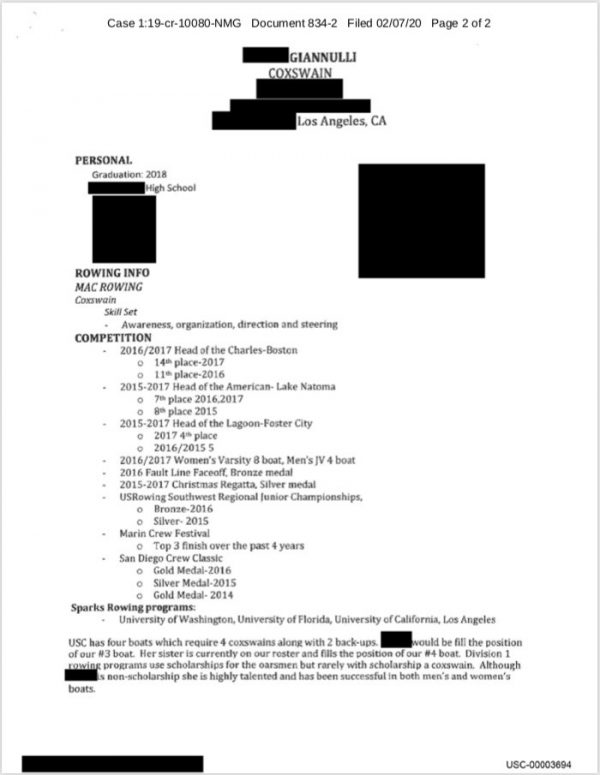 Loughlin and Giannulli claimed the feds weren’t giving them access to information. The former Hallmark star and her husband demanded evidence from interviews that hadn’t even taken place yet. The feds had a snippy response to those demands.

“The government has broad powers, but they do not include mental telepathy or time travel. The government cannot disclose witness statements before the witnesses make them,” prosecutors stated regarding the Loughlin’s demand for evidence.

Loughlin and Giannulli Plead Not Guilty

Loughlin and Giannulli are pleading ignorance in the case. They claim they only did what college admissions hustler Rick Singer told them to do. And maintain that they thought the hefty sum was a donation to the school.

Rick Singer, the mastermind of the wide-sweeping college admissions scandal that also sent actress Felicity Huffman to jail, entered a guilty plea. Unlike Loughlin and Giannulli.

But, emails between the parents show that they knew they weren’t doing things the proper way. When a USC official offered a private tour for the couple’s oldest daughter, Bella, father Giannulli jokingly bypassed the opportunity because he knew they were already set.

BACKSTORY: Loughlin’s Husband Seemingly Joked In Emails About Rejecting ‘Legitimate Approach’ To Getting Daughters Into USC