There continues to be a lot of talk about Jon Jones possibly moving up to heavyweight. But, Curtis Blaydes believes the light-heavyweight king could be in for a tough go if he does.

Talk about Jon Jones moving up to heavyweight continues to make the rounds, and many people believe “Bones” will make the jump at some juncture. Well, one of the UFC’s top heavyweights, Curtis Blaydes, thinks the 205 champ could be in for a rude awakening fighting bigger opponents. 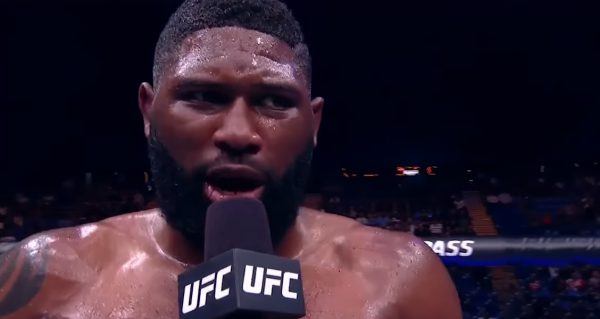 Jones has been talking about fighting at heavyweight for years, due to his dominance in the light-heavyweight division. In the past, he talked about fighting Brock Lesnar and more recently he’s expressed an interest in fighting Francis Ngannou or the current champ, Stipe Miocic.

Well, recently Blaydes spoke with BJ Penn.com Radio and the topic of Jones moving up to heavyweight came up. While the powerful wrestler acknowledged the talent of Jones, Blaydes believes the size and power “Bones” would give up, would be his undoing.

“I believe he has all the skill in the world.  I don’t think anyone is as creative or blends as well as he does, but there is gravity and weight and it does become a factor when you come up to heavyweight. I just think kind of like how it was with [Max] Holloway versus [Dustin] Poirier when Holloway tried to bump up to 155, he was able to land just as often as Poirier, but when Poirier would land, you could see it hurt. When Holloway lands, Poirier would just keep moving.

It’s certainly something to consider. On account of Jones’ comprehensive game, athleticism and massive reach, many believe he could be a force at heavyweight. But, Jones has never been known as a power puncher and he has taken some big shots in his last couple of fights. If it was say, Ngannou hitting him, rather than Dominick Reyes, would Jones walk through it? Probably not.

Blaydes is confident he could take out Jones

And how does Blaydes see a fight between himself and Jones playing out? While talking about that, “Razor” said this:

“On the ground also, I know he’s an amazing wrestler, jiu-jitsu player, but again gravity plays a bigger factor in heavyweight fights,” Blaydes said. “And I know speaking for me personally I bet real heavy hitters with amazing pressure [would have success]. I think I’d be able to hang with him on the ground. I think I’d be able to get some elbows in. And again, the power I’m bringing on the ground I could put him away.”

There you have it. As things stand right now, it doesn’t look like we’re going to see Jones at heavyweight, anytime soon. Following his controversial win over Reyes there’s been plenty of calls for a rematch and Jan Blachowicz also made a compelling case for a title shot recently, by taking out Corey Anderson.

UFC 249: Justin Gaethje Outlines Why he Decided to Fight Tony Ferguson, After Sleeping on It