Donald Cerrone has said he plans to stand-and-trade with Conor McGregor as a means to thrill fans, but Matt Serra thinks that plan will likely lead to his downfall.

As UFC 246 nears more and more pundits, fighters and observers have been weighing in on Saturday’s bout between Conor McGregor and Donald Cerrone. One of the latest to do so is former welterweight champ, Matt Serra, and he thinks “Cowboy’s” desire to entertain fans could ensure a McGregor win. 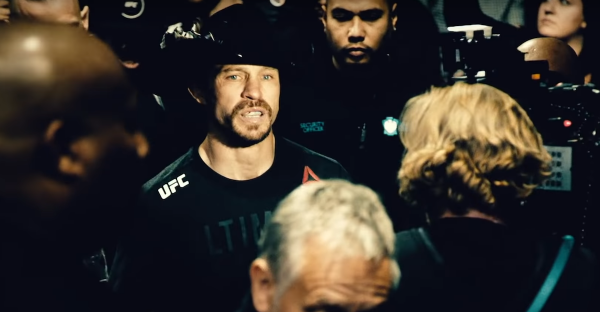 Since McGregor is one of the biggest names in combat sports, and because Cerrone is unquestionably a fan favorite, there’s been no shortage of predictions making the rounds. During a recent episode of the UFC’s podcast, Serra and co-host Jim Norton weighed-in on the fight. Here’s what Serra had to say (quotes via Bloody Elbow.com):

“His grappling is underrated,” Serra said about McGregor. “He’s good. And even when Khabib (Nurmagomedov) did that shot in the beginning he timed a little knee in there. He’s better than you think.

“I think ‘Cowboy’ has more ways to win, but styles make fights. Even though he’s got more money than God and this and that, I feel this means more to Conor in the sense that ‘Cowboy’ is in there to have fun, win or lose. Big paycheck. The guy is already happy as sh-t.

“This is huge for Conor. And usually he’s [Cerrone] a slow starter. Not Conor. Conor is a beast in those early rounds. I tell you right now a lot is going to be dictated in that first round, you know?

“I think he’s [Cerrone] caught up in the ‘let’s give everybody a show type of thing.’ And in that kind of headset I think Conor will probably end up KO’ing him.”

Serra’s comments are in keeping with what other notable names like Jorge Masvidal and Georges St-Pierre have said. Cerrone’s clearest path to victory is cleared by takedown attempts and looking to take the fight down at some juncture. Not only as a means to attempt submitting McGregor, but to give him something else to think about and to tire him out.

But…so far, Cerrone has said he’s going to stand and trade with McGregor, since that’s “what everyone wants to see.”

Could Cerrone just be saying that?

So, the question is, could Cerrone just be saying this? And in reality, some wrestling could be in the game plan and they don’t want to give that away? Anything is possible. Sure. But, since Cerrone typically speaks his mind, there’s a good chance he has no plans to shoot in.

Now, if Cerrone gets tagged badly, and it’s a matter of survival, maybe we will see him go for a takedown? Or, if it’s been a close round, and he sees an opening, who knows? Maybe “Cowboy” will shoot a double then too?

UFC 246 will be hosted by the T-Mobile Arena in Las Vegas.

UFC 263: Big Moment In The Career Of Champ Israel Adesanya