Recently much of the talk surrounding Jorge Masvidal has been about a potential showdown with Conor McGregor. But, recently "Gamebred" and his team shared out a video that could ratchet up tensions with Kamaru Usman.

In recent weeks, Jorge Masvidal has made it clear that collecting the biggest check in his next bout is his top priority, and not necessarily the UFC’s welterweight title. But, recently Masvidal and his team shared out a video which takes a poke at Kamaru Usman, over the champ pretending not to know who “Gamebred” is. 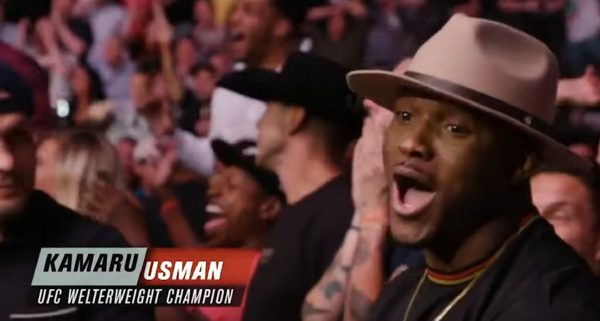 Masvidal and his team have been sharing out more and more content lately on YouTube, including the video below. The video includes footage of Usman praising Masvidal and reacting to his record setting, KO of Ben Askren. It also shows the champ pretending not to know who Masvidal is.

What could this video mean?

Now, the release of this video doesn’t necessarily mean that Masvidal has now changed his focus, and is targeting a fight with Usman. But, the timing of it is somewhat interesting.

Recently it was reported that Tyron Woodly is going to fight Leon Edwards at UFC London on March 28th. Since the consensus is that Edwards was one of the front runners for a title shot (Usman himself said he thinks Edwards is deserving of one), that leaves Masvidal next in line.

So, if Conor McGregor loses to Donald Cerrone on January 14th, and no deal with Nick Diaz has been reached, don’t be surprised if the UFC works hard to make Usman – Masvidal a reality.