NFL All-Pro defensive tackle Albert Haynesworth posted an Instagram picture of the White House and instructions for Iran to attack it.

Since President Donald Trump ordered the strike to kill Iranian terrorist Qassem Soleimani, liberals are armchair quarterbacking in alarming ways. Many are tripping over themselves to side with Iran over members of our U.S. military who Soleimani targeted. Former NFL star Albert Haynesworth joined their ranks and is now facing some heat after asking Iran to target the White House.

NFL All-Pro defensive tackle Albert Haynesworth wanted to simultaneously prove that he’s not the sharpest knife in the drawer and that he’s a traitor. He attempted to roll out the red carpet for Iran to target the President of the United States by posting a picture of the White House and instructions for the terrorist supporting country to attack it.

“@Iran if you are going to attack the United States, well here is a picture for you! #justtryingtohelp us folks that aren’t starting wars,” Haynesworth wrote.

After posting it, the former Tennessee Titan realized his mistake and deleted it. 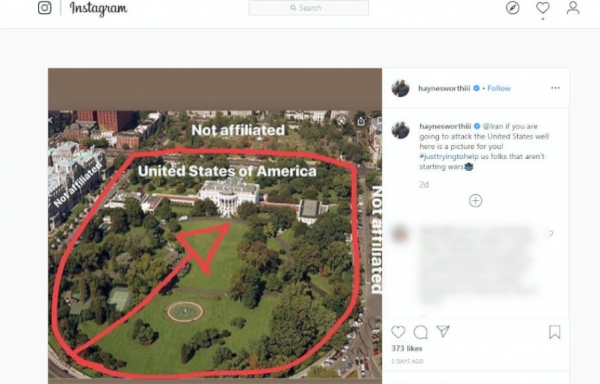 George Lopez And The Secret Service

This stupid post could land Haynesworth a visit from the Secret Service.

Comedian George Lopez offered to assassinate President Trump for half as much as the $80m bounty Iran is reportedly offering. Now, the unfunny leftwing comic is facing federal scrutiny regarding his comments. The same should be done to Haynesworth.

Although Haynesworth’s threatening post was deleted, there were already plenty of people counter posting to highlight his stupidity and lack of knowledge.

The former NFL tackle attempted to defend Soleimani by sharing a screenshot regarding the attack on our Iraqi Embassy led by the now dead Iranian General.

In the post, Haynesworth pointed out that no Americans were killed in that attack. So he believes Soleimani should still be alive and free.

Perhaps Haynesworth took too many blows to the head in the NFL because he doesn’t appear to understand (or care) that Soleimani is responsible for the deaths of hundreds of American soldiers. And injuries to thousands more because of his advance IEDs.

“THIS IS A MUST READ if you can think for yourself!!! #dontdrinkthekoolaid#ZEROKILLEDINEMBASSYATTACK,” the former NFL star shared in the Instagram post below.

THIS IS A MUST READ if you can think for yourself!!! #dontdrinkthekoolaid #ZEROKILLEDINEMBASSYATTACK

Haynesworth still has another post up that alludes to asking the Iranians to attack the White House.

“So take that bs to 1600 White House road or whatever it is,” the shared screenshot from Haynesworth’s Instagram account below reads.

I deleted the last post because literally you people think I was trying to direct Iran to attack. If that was a serious post which it wasn’t, I would be telling Iran Innocent Americans did not attack you. You are having beef with Donald Trump not innocent Americans! But most of the people that are getting pimped out by Donald Trump definitely don’t have a sense of humor! #butthurtmemes

Kaepernick Believes Soleimani Was Killed Because Of Racism

Haynesworth isn’t the only former NFL player to make stupid comments regarding Iran and Soleimani’s death.

Failed quarterback Colin Kaepernick claimed the terrorist was killed because Americans are racist.

Haynesworth and his ilk need to realize if they are going to speak up on a topic, they should at least be educated about it.

Not only is his stupidity on display but now he might be getting a visit from the Secret Service too.