A Seattle restaurant co-owner mocked a father and daughter who died while hunting because she assumed they supported the President Trump.

Trump Derangement Syndrome has become so widespread that it has caused a Seattle restaurant co-owner to attack and smear a father and daughter who died while hunting last week because she assumed they supported the President.

Thirty-year-old Kim Drawdy and his 9-year-old daughter Lauren of South Carolina were killed in an awful hunting accident last week. Another hunter mistook them for deer and shot them both.

It’s hard to understand how anyone could see this as anything less than a tragedy that will affect this family for the rest of their lives, but Lana Kiossovski felt the need to justify and celebrate their deaths on Twitter.

Since they were hunting, Kiossovski presumed they were gun loving Trump supporters. That made them worthy of being her target.

There is no evidence that Drawdy was political. But that didn’t stop this unhinged liberal from launching an appalling Twitter attack against the recently deceased father and daughter.

She labeled the pair as Trump supporters simply because she has a perception of hunting that she feels justified her dreadful words.

“1.5 less MAGAbilly’s in the world. At least they died supporting their beloved 2nd amendment.” the co-owner of St. John’s Bar and Eatery in Seattle viciously tweeted.

The liberal restauranteur got immediate backlash for going way too far by exploiting and cheering the death of a child and her father. She deleted the tweet, but of course there is a screenshot which you can see below. 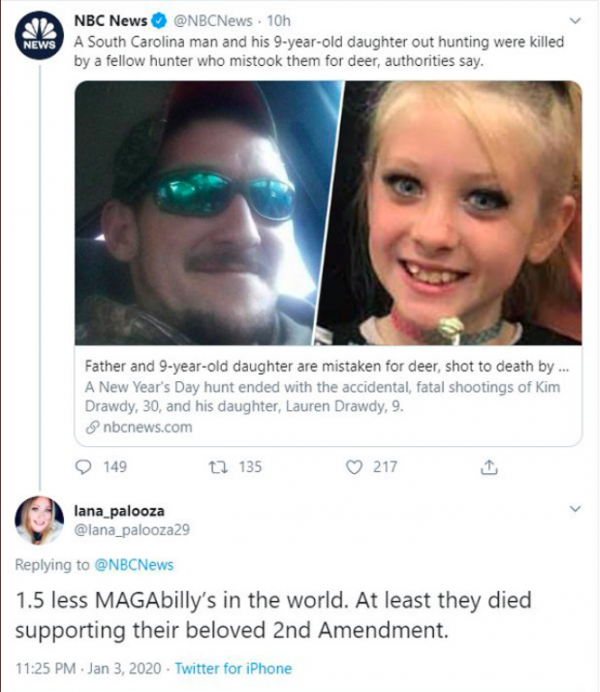 It’s logical for to human beings to be appalled at Kiossovski’s disrespectful attack on the recently killed child and father. And thus to choose not to patronize her establishment.

After all, why would you want to enrich her lifestyle by handing over your hard earned money.

"1.5 less MAGAbillys in the world," wrote Lana Kiossovski in response to shooting deaths of a father & child in SC. Following backlash against her Seattle business, her husband claims she wasn't a co-owner. But this is contradicted by the archived page for St. John's Bar & Eatery pic.twitter.com/defMdw8m7V

Fearing backlash and boycotts of the restaurant, Lana Kiossovski’s attempted to claim that she was not an owner and not involved in the business.

But, a little digging revealed that Lana was listed as a co-owner of St. John’s Bar and Eatery on the restaurant’s website. As recently as November, archives of the business’s website state that Lana Kiossovski “spearheaded the effort to locate a suitable space.”

Even if she wasn’t involved in the restaurant as the wife of the owner she benefits by its success.

This is a good example as to why tweeting while suffering from Trump Derangement Syndrome is not wise.