Reby Hardy is not a woman to be silenced. Recently, she spoke out on social media about the WWE and how they use Matt Hardy's history against him.

According to Matt’s wife Reby Hardy, the WWE are not shy to use Matt’s debt to the company against him. While we never had any real evidence of the company using tactics like this, Reby just lifted the veil on some of them.

Series of Losses for Matt Hardy

With Matt Hardy’s contract expiring in February of 2020, many fans are speculating about the future of the wrestler. Recently, he has suffered a series of losses to Buddy Murphy and Drew McIntyre. This has not escaped the WWE Universe.

When a fan asked why he returned to the WWE only to lose, Matt Hardy said the following:

“I needed to return to @WWE to finish in the right way. I didn’t want 2010 to be my finale. I returned in the most EPIC way & repaid my debt. I waved the #WWE flag with pride & worked hard to be a model employee. My conscience is clear & I am at peace.”

One could argue that the WWE is now indebted to Matt, especially after how they treated him since his return. His gimmick is almost forgotten, so one must wonder if that was their intention all along.

Repaid your debt but they’ll still rub it in your face every chance they get 🙃 that’s ok, we don’t pretend the less than perfect shit never happened here ☕️ https://t.co/CoFcu4BeSu

Reby Hardy is not a woman that will remain silent when it comes to her husband and her family. Frankly, this is why we adore her so much. She responded to Matt’s tweet in a surprising manner.

As you can see from the social media post, Reby accuses the WWE of rubbing his debt in his face whenever they can. Using this kind of tactic is low to say the least, especially when you claim you have forgiven someone for past transgressions.

The Future for Matt Hardy 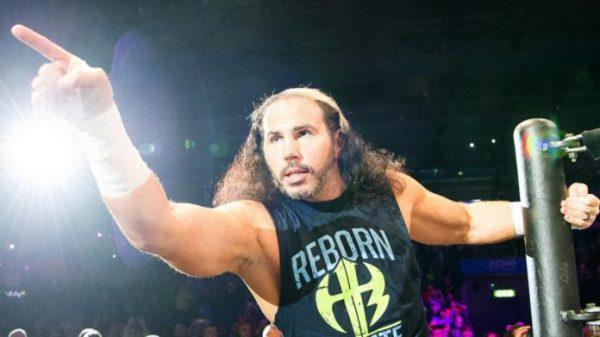 Fortunately, the WWE is no longer the be-all-end-all for wrestlers. While it looks like Matt Hardy is staying loyal to the company, he might change his mind if he wants to keep wrestling.

If Matt Hardy wants to retire from wrestling, his perfect role – in my humble opinion – could be WWE’s creative department. After all, he had one of the most successful gimmicks in the wrestling universe. He also made it during a time where he was not employed by the WWE. Matt Hardy could be just the thing that the WWE needs.

Of course, there is a large portion of fans that are calling for Matt Hardy to join AEW. At the moment, AEW is a competitor for NXT and the WWE as a whole, no matter how much management is trying to deny it. If Hardy wants to keep wrestling, he would be a brilliant acquisition for AEW. Nevertheless, I doubt WWE will be that eager to let Hardy leave.

With his contract running out in February, we will not have to wait long for a resolution to our question. It’s likely Matt and the WWE are in discussions about his contract now or will be soon. Either he will renew in the weeks to come, take another role within the company, or he will leave for another promotion.