RAW In A Nutshell: Happy Holidays And Seasons Beatings!

It's the last RAW in a nutshell before Christmas. The holidays are in full swing. Let's see the roster get into the spirit and deliver some beatings.

It’s a festive (and pre-recorded) edition of RAW this week, as the Superstars put on the final red brand show before Christmas-if that is your thing. We are in the midst of a number of holiday celebrations for our many readers, so let’s just say “happy holidays and seasons beatings!”. As in, we’ve got some big matches to enjoy with this episode of RAW. Perhaps none is bigger than newly re-minted heel Seth Rollins challenging United States Champion Rey Mysterio for the title. It promises to be an exciting few hours of holiday wrestling fun, so let’s crack open this Nutshell!

Lately I am a bit down on matches when it comes to RAW (and SmackDown). That’s not to say we don’t get good matches…I just think lately the quality has been kind of even…where sometimes matches don’t look to be significantly better than others.

For this week’s RAW, I will give a nod to the US Championship match…though to be honest, the payoff here was the end of the match, but we will touch on that later. 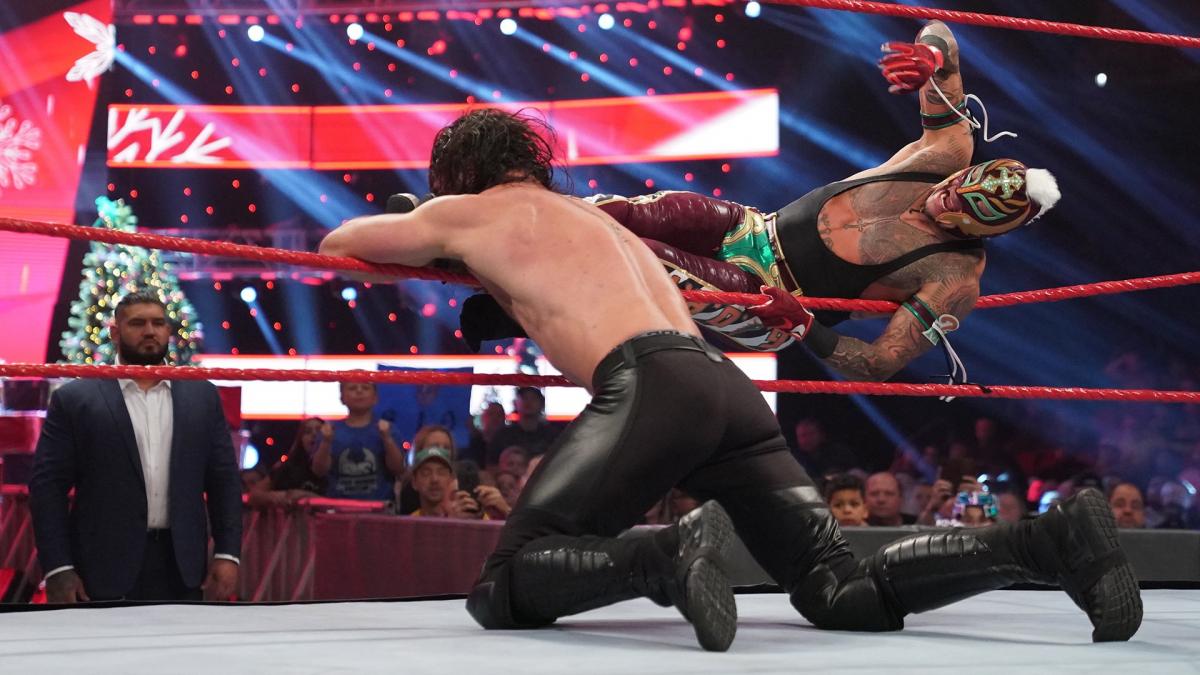 We had a few jobber matches tonight, but the Rowan-versus-Jobber ones are getting to me. Let’s get him someone a bit more legit to deal with soon, shall we? 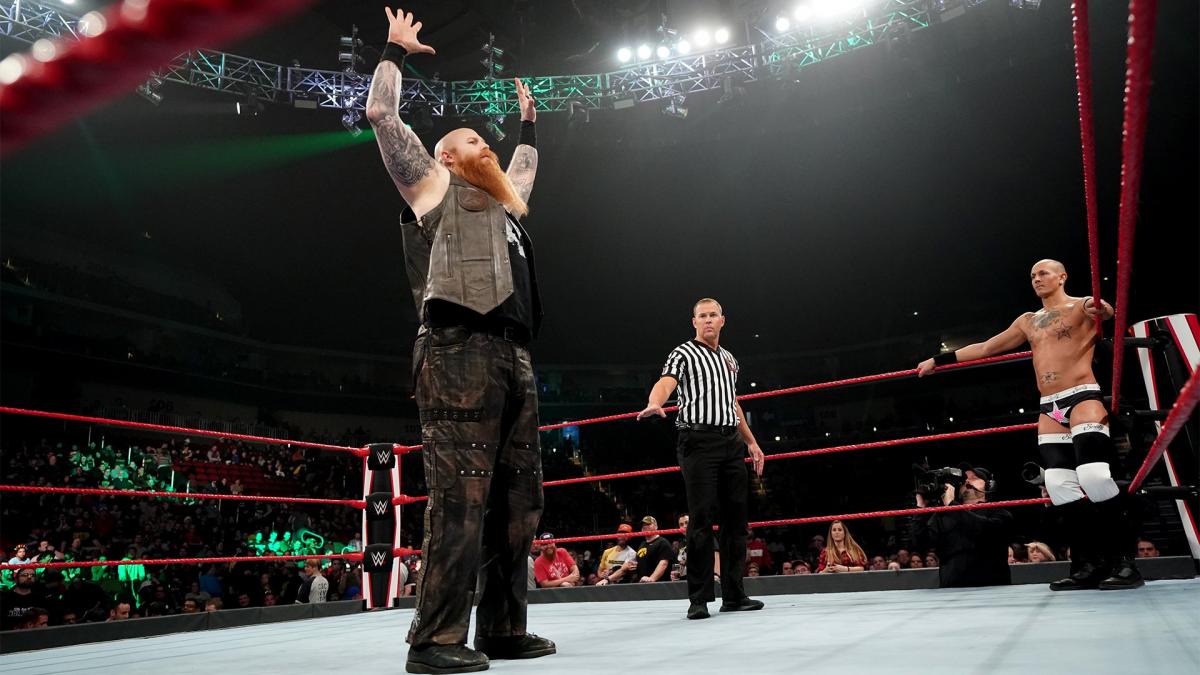 I’d say this show belonged, once again, to Seth Rollins and the Authors of Pain. 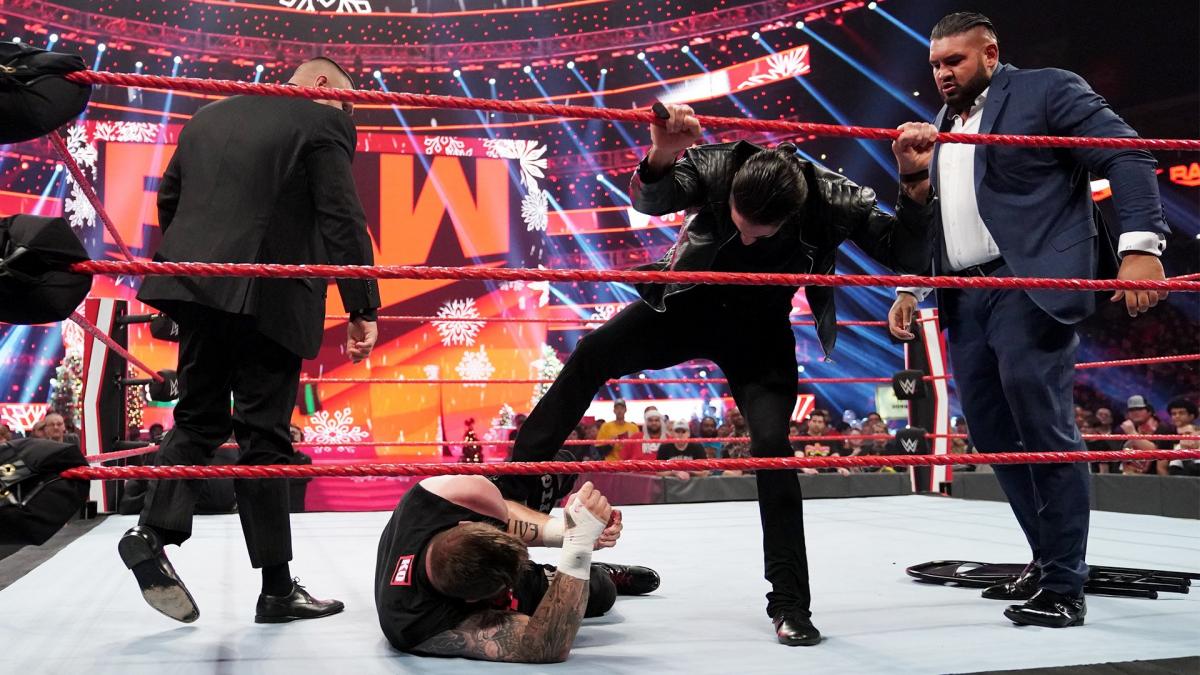 However, Samoa Joe was excellent too…the ending of the show notwithstanding.

This is EXACTLY how you put over talent on commentary. Well done, Samoa Joe. #RAW pic.twitter.com/ZypYritmEe

I’m convinced at this point that Samoa Joe is just ridiculously good at everything.#RAW

I love Samoa Joe on commentary.

Instead Joe focuses on building up a reativey unknown Green to us! #RAW

We could say it was Owens putting Mojo Rawley through a table. Was a big spot, for sure. 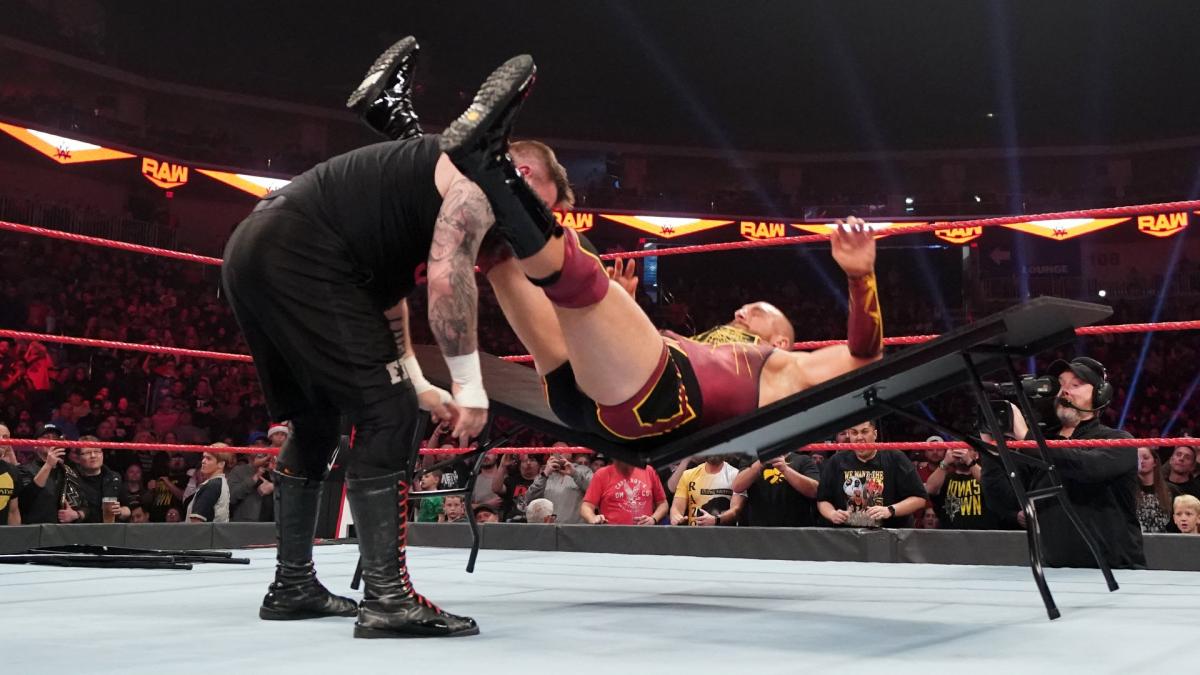 However, I am going to go with the Samoa Joe table spot instead. Looked like joe took a rough bump too…and considering he was already out injured, let’s hope it was just awkward looking, but nothing more than that. 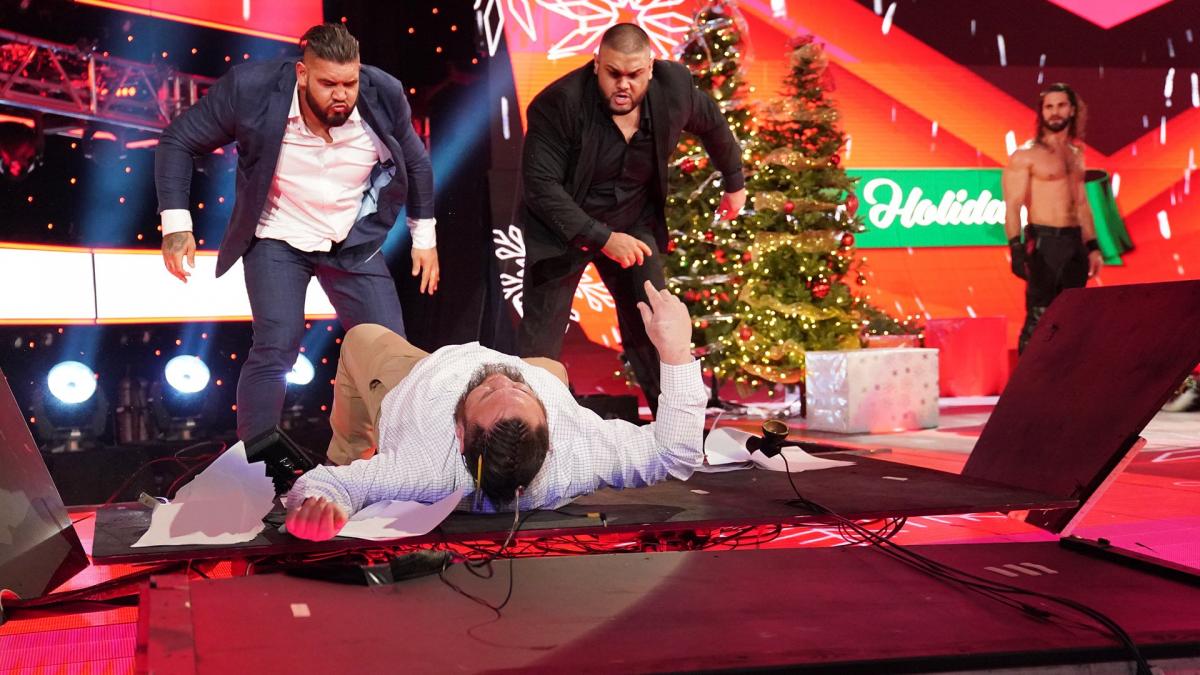 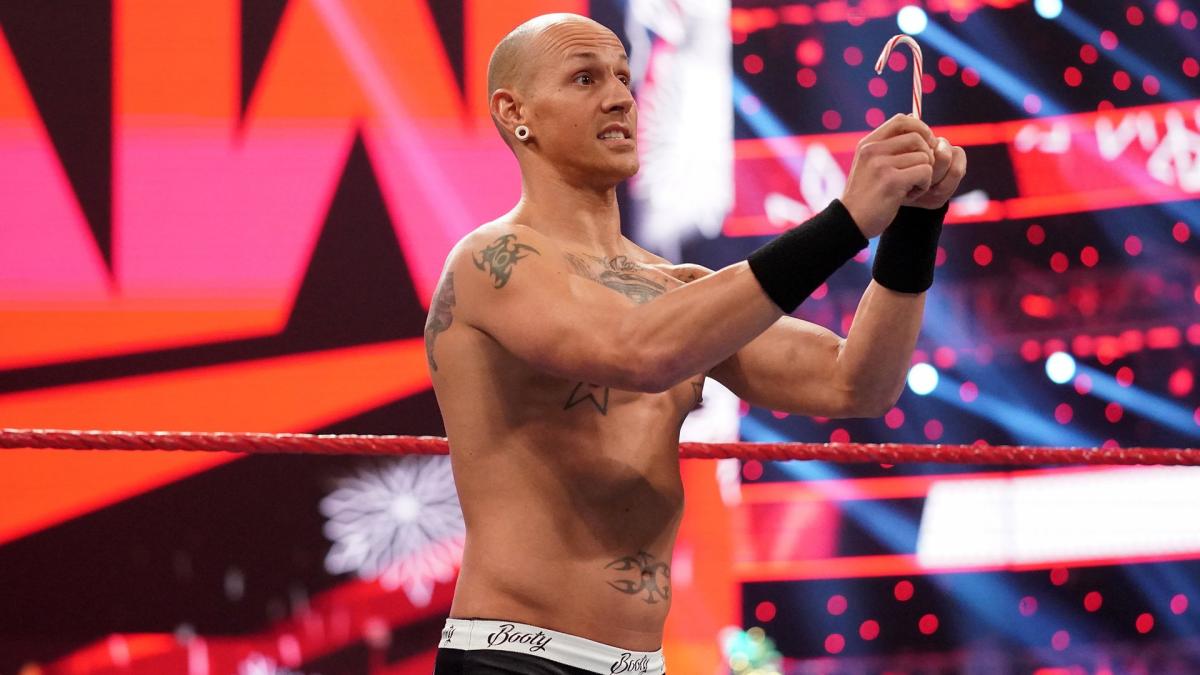 This one has to be the AoP attack on Samoa Joe to close the show. Joe, mostly a heel in his main roster exposure, stood up to prevent further beatings on a down Rey Mysterio. For his resistance, he got the ire of all three heels, and his briefly teased face turn from months back became officially in play.

It was done well, I think, and it will be interesting to see where things go from here. There are several top babyfaces with ongoing issues with the new heel trio, with Joe and Kevin Owens chief among them. With Joe out of action for a while now, coming back and coming back with a face perspective should freshen things up, and here’s hoping fans get behind this new program.

Not sure what was better: Lana, announcing mid-match that her “wedding” to Lashley would happen on the live New Year’s Eve eve RAW? Or that Rusev later offered congrats and said the two deserved one another.

But, let’s not kid ourselves. We know that one way or another, next week’s ceremony will be all sorts of a train wreck.

When WWE announced a Rollins/Rey match with the United States Championship on the line, I really expected it would end up with a title change, which would lead to the new US Title reveal. 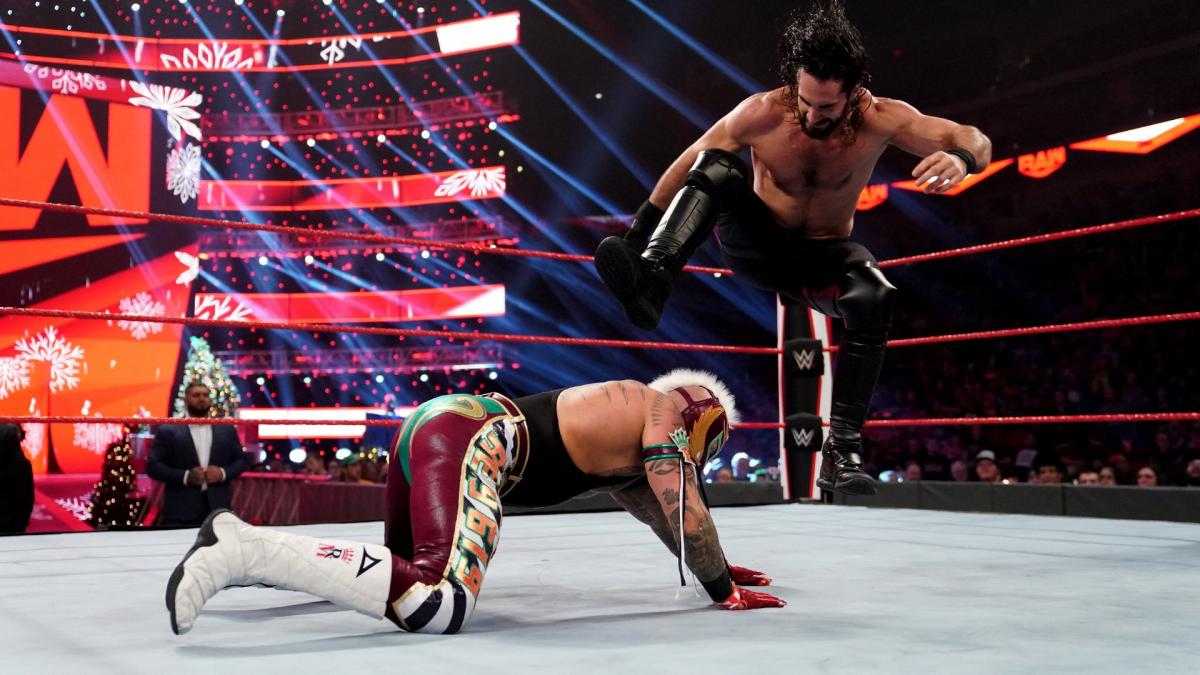 That scenario may come true, but not on this show.

Still not enamored with the Rusev-Lana-Lashley program, but with the faux wedding next week, I have to imagine this might either finally be running it’s course…or getting to a more enjoyable phase of it’s existence.

For me, the best part of the show was the Samoa Joe full-on babyface turn. I was behind it when it seemed we would get it as part of the Roman Reigns angle from the summer, but that whole program died on the vine. Now, it seems WWE is fully committed to seeing this one play out. As much as fans have been into a face Kevin Owens, I truly do think they will be even more into a face Samoa Joe…especially if WWE lets him go like a modern day Austin/Rock anti-hero. Fingers crossed.

As far as a pre-taped holiday show, it was not bad. I think the worst bit of it for me was finding out that even LAST week’s RAW wasn’t actually live. Not a major deal, it was on a long tape delay, but it was weird to see after the fact, and glad I had not watched the Twitter feeds during the show. Next week is back to live, so it should be interesting.

Braun Strowman Gets A New Look After His WWE Release (PHOTOS)