Former “Dirty Jobs” host Mike Rowe talked about what Veterans Day means to him on “Fox & Friends.” What he had to say was incredibly refreshing in a time when liberals have made it “uncool” to show patriotism and praise veterans. While most public figures have followed suit by staying silent about veterans and their causes, Rowe is going above and beyond to show servicemen and women how much he respects their sacrifices.

Rowe discussed on Fox News how meeting with an injured veteran impacted his own life. And he praised the mentality that those who serve in the U.S. military have the “band of brothers” mentality.

“Is there a greater meritocracy in the world? Is there a better example of true diversity? The thing that I’m most proud about when I go to bases when I visit with people, they are utterly colorblind. There’s no conversation about ‘trigger words.’ There’s no safe space. The military is not a safe space,” Rowe said.

He went on to talk about his close friend Travis Mills. Mills is a quadruple amputee veteran who he met at The Science and Engineering Festival in DC years ago. Rowe recalls that when he met Mills, he was immediately struck by the fact that the veteran had not one “ounce of self-pity” despite everything he had been through. Instead, Mills simply wanted to talk about how he and his fellow soldiers loved watching “Dirty Jobs” during their deployment. 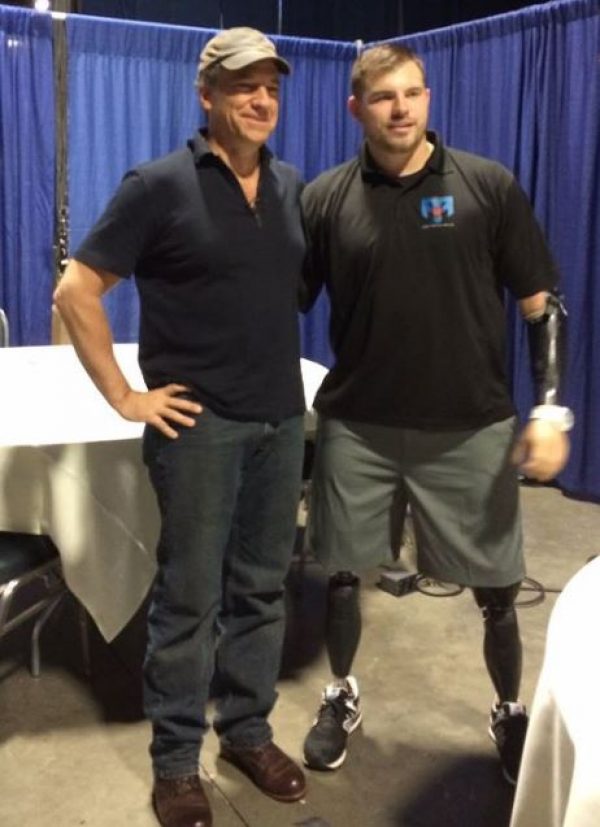 Rowe was incredibly busy with the convention at the time, but he realized the importance of this chance meeting. He rearranged his schedule so he could keep talking to Mills.

Rowe remembered, “In a heartbeat you go from put-upon, in a hurry, trying to take care of your stuff to saying, ‘OK, let’s cancel that, let’s sit down,’ and I talked to Travis for an hour.”

In the video below, Rowe shares how he met Travis Mills and how that meeting impacted him:

RELATED: Rowe Cracks Up Reading Letter From His Mother About Her Horrible Flight

Rowe added that Mills has since opened the Travis Mills Foundation in Maine that is devoted to helping veterans who have been injured in active duty or as a result of their service to our country.

Now that liberals have made patriotism out to be “uncool” and “lame” in this country, veterans seem to be getting less respect than ever these days.

That’s why it’s so refreshing to see a public figure in the entertainment world like Mike Rowe speak out to give them the respect and appreciation that they deserve. Here’s how Rowe honored veterans this year on Instagram:

This Veterans Day, I was honored to tell the story of Rob O’Neill, who as many of you know, was kind enough kill Osama Bin Ladin. Thank you, Rob. And thanks to everyone who is a part of SEALTeam Six, and all those who wear a uniform and risk everything on my behalf. This clip, along with many others, can be seen on this years episode of American Valor. Check your local listings. Speaking of TV, tomorrows audience on Fox and Friends will consist entirely of veterans. I’ve been invited onto the show, 7:20ish. See you then. Happy Veterans Day!

We would like to thank Travis Mills and all of his fellow servicemen and women for all that they have done for our country. God bless American veterans everywhere!