There are plenty of people who don't believe Tyson Fury will ever, actually compete in a MMA bout. But, according to Darren Till, he thinks the odds of seeing the boxing star throwing hands in the cage are pretty good.

When Tyson Fury announced his desire to compete in a MMA fight, plenty of people shot down the possibility and continued to do so, after he did some training with Darren Till. But, according to the latter, there is a very decent chance we’ll see the boxing star in a crossover fight. 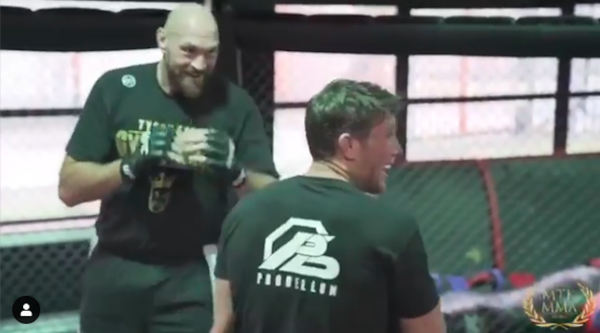 Fury turned heads throughout combat sports a few weeks ago when he relayed he wants to compete in a MMA fight and soon. Then, he followed up on those comments by doing some training with Till. The UFC middleweight contender recently talked to BT Sports about Fury’s MMA aspirations, and while doing so, Till said this (quotes via MMA Mania):

”I think it’s about 70/30. 70 yes, 30 no,” Till said. “You gotta remember boxing to MMA is very different as well. He’s making a lot of money, he’s a top three heavyweight. I’d love to see it for the entertainment factor. It’s all about the entertainment and whoever he gets – maybe Stipe wants to fight him and probably thinks he can box him. I don’t think so. But I hope so. But maybe I’d be in on a little percentage of that as Coach Till. We’re the same management, we’re both MTK so no matter what I’m just supporting him, I’m supporting my team.”

Now, if Fury really, really wants to give MMA a go, you would think sooner or later will happen. Provided, of course, there are no contractual issues standing in his way. But, since there are some massive, boxing matches out there for him, including a rematch with Deontay Wilder, we likely won’t see him fighting under MMA rules anytime soon.

Till comments on training with Fury

And how did Fury’s training session with Till go? While talking about that, the Liverpool fighter said this:

”I thought to myself, he’s gonna come and learn a few techniques and that’s it,” Till said. “He said to me when we were starting, ‘I’ve come to train hard.’ I was like ‘Okay then.’ He’s come to train, he’s gonna get some training. You’ve seen the video. So I said ‘Tyson, I’m gonna teach you what I think you need to know about MMA. You’re considering this. I’ll teach you what I think you need.’

”So we started off with some warmups Coach Mike the wrestler always teaches us. I got him involved in some sprawls and shadowboxing and we went into sparring pads. We done a hard hour, I swear, a hard hour. And after he was chatting with me about the mental side of things, what he went through and stuff like that. I swear, that guy’s got a rock solid mentality. Unbelievable mentality. I thought mine was strong. The stuff that came out of his mouth was next level.”

Till, meanwhile, is coming off a decision win over Kelvin Gastelum at UFC 244 earlier this month. The fight marked the first time the former welterweight competed at middleweight in the Octagon.

UFC 266: The Enigma That Is Nick Diaz Comes To Light Again