Ben Askren never blamed issues with his hips for how his UFC run turned out. But, according to his longtime coach Duke Roufus, the condition impacted "Funky" in the later years of his career.

When Ben Askren recently announced he’s retiring, and that the fact he needs a hip replacement played a key factor, the decorated fighter didn’t blame the condition for his recent losses. But, according to his longtime coach, Duke Roufus, Askren’s training camps were indeed impacted by his hip issues. 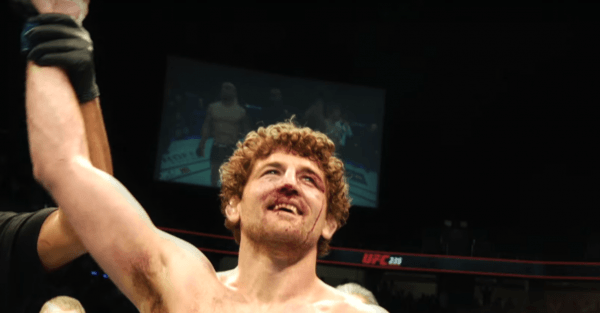 Last week, Askren announced he’s hanging up the gloves at the age of 35. The announcement came just a few weeks after he was submitted by Demian Maia at UFC Singapore. That defeat followed Askren’s devastating and brutal knockout loss to Jorge Masvidal in July.

Askren was recently told by his doctor that he needs a hip replacement, and the renowned wrestler said that fact, played a big role in his decision to retire. While Askren never said the issue impacted his ability to fight, Roufus recently told MMA Fighting this:

“It’s been bad for a while,” Roufus said. “Honestly, training camps this year were hindered due to his hip. He’s just such a tough kid, just fighting through things. Not to make excuses, but it’s definitely affected him a lot.”

Now, sure, since Askren was taken out by Masvidal in just five seconds, his hip issues didn’t play a role. But they might have in his loss to Maia, as that fight did go into the third round.

Roufus says a younger Askren would have won UFC gold

Since Askren announced his retirement, there’s been a lot of debate about his time in the UFC. Some have argued that the losses Askren incurred proved he faced less talented competition in Bellator and ONE Championship. Others, including Askren, have noted that we didn’t see him in the UFC during his prime years.

Well, when asked if thinks Roufus would have won the UFC’s 170 crown, if he had joined the organization earlier, Roufus said this:

“He would be champion,” Roufus said. “He’d be the triple champ. ONE, Bellator, and UFC. I believe that. Unfortunately, circumstances and timing don’t work out. I’ve seen him do some special stuff in the cage and in practice ever since I met Ben, it’s just sometimes timing doesn’t line up in this industry.”

“The toughest thing is timing. I wish that Ben would have been given the opportunity when he should have, to enter the UFC when he was coming out of Bellator,” Roufus said. “Everything worked out the way it did, I blame Bjorn Rebney, the way he treated that situation that caused Ben to not matter to the UFC.

“That being said, I wish Ben would have come into the UFC at that time. I think we would have seen the real Ben. Guys like myself and Tyron Woodley have talked about the special Ben, at that time he was untouchable.”

Ya. It is unfortunate that we never saw Askren fighting the UFC’s best in his late 20’s and early 30’s. But, at the end of the day, he had an amazing and impactful career.