Recently there's been speculation regarding the fighting future of Ben Askren, and now the 35-year-old, decorated fighter has announced he's hanging up the gloves.

Following his submission loss to Demian Maia last month, Ben Askren relayed that retirement was a real possibility, and now the renowned wrestler’s confirmed he’s hanging up the gloves. 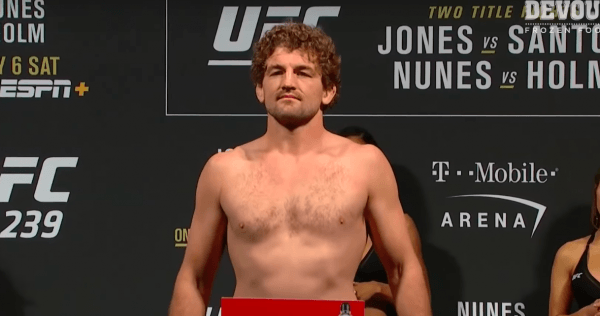 Askren faced the galaxy class submission artist at UFC Singapore in October, and was choked out by Maia in round three. The defeat followed Askren’s vicious knockout loss to Jorge Masvidal in July.

After his bout with Maia, the 35 year-old Askren reported that he was seriously considering retiring.

Well, Askren appeared on Ariel Helwani’s MMA Show on Monday, and during his segment, the decorated fighter announced he’s retiring (quotes via ESPN).

“I’ve been having hip problems, and I finally had the discussion with my doctor … and I need a [left] hip replacement,” Askren said. “So, man, that’s it for me. I’ve been thinking about this for a week and what I was going to say, and I’m filled with gratitude for how great of a career I’ve been able to have, even though obviously in the end it did not turn out to go my way.”

“I don’t want people to think I’m using [my hip injury] as a reason why I lost,” Askren said. “I lost because I wasn’t good enough, plain and simple, my opponents beat me, they were better than me. And I want that to be said out there.”

So, this news shouldn’t come as a surprise, all things considered. Hopefully Askren has a  full and speedy recovery from the procedure.

Recently there’s been a lot of debate about Askren’s abilities and career, and the fact he incurred consecutive losses after moving to the UFC (and his win over Robbie Lawler in his Octagon debut was highly controversial).

But, none of that changes the fact Askren had a very impressive career. A career few people on this planet have had. Not only did Askren win titles with both Bellator and ONE, he defeated notable fighters like Douglas Lima, Shinya Aoki, Zebaztian Kadestam and Andrey Koreshkov along the way. It’s also worth noting that he didn’t move to the UFC until his mid 30’s.

“Funky” walks away from the game having gone 19-2.