Brock Lesnar is WWE Champion, but he is apparently on a hiatus and not expected back anytime soon. Also, here’s the latest on Mauro Ranallo’s status. 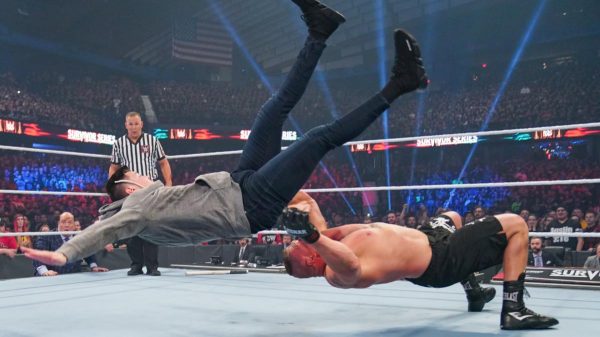 Do expect to see the WWE Championship defended for the rest of the year. Brock Lesnar is known to work a limited schedule and that will not be chaining anytime soon.

In the Wrestling Observer Newsletter, it was noted that Lesnar is now on hiatus and expected to return in early 2020. This means, Lesnar will not appear on TV again until WWE gets ready for the Road to WrestleMania; which officially starts with the Royal Rumble in January.

As should be expected and history seriously indicates, we’re unlikely to see Brock Lesnar again in 2019.

He’ll return to TV to build to whatever he does at Royal Rumble.

What’s he doing at WrestleMania 36? Cain Velasquez is the rumour. WWE plan to bill it like a ‘rubber match’

When SmackDown debuted on the USA Network, Lesnar won the WWE Championship from Kofi Kingston in about 10 seconds. Since then, he successfully defended the gold against Cain Velasquez at Crown Jewel and then defeated Rey Mysterio last Sunday at Survivor Series.

Doesn’t feel right that Bray Wyatt this is on #SmackDown and that Brock Lesnar is on #Raw.

Rt and Like if you want Brock Lesnar to go away pic.twitter.com/iLm2Msrf6H

As of now, there has been no word on who Lesnar will defend the title against at the Royal Rumble or what WWE is preparing for “The Beast” at WrestleMania 36.

Mauro Ranallo Returns To TV, But Not For WWE

One of the biggest stories coming out of last week’s Takeover and Survivor Series events was Mauro Ranallo calling out. He was set to work Survivor Series, but WWE was informed he would not appear after Corey Graves tweeted about his Takeover performance.

Since those events, Graves has publicly apologized and Ranallo was supposed to return on Wednesday’s NXT. He did not appear and his return to WWE TV remains questionable. Also, he deleted his Twitter account, which he is typically always posting from.

At one point, Dave Meltzer stated on the Wrestling Observer Radio how Ranallo was in rough shape. Although, he did commentary last night for the Showtime Boxing event, so things might be looking better.

.@davemeltzerWON noted on Wrestling Observer Radio that Mauro Ranallo has been in rough shape and it’s probably worse than has been stated so far.

Ranallo has been open about suffering from mental health issues and WWE has been understanding with his condition. There have been a few instances where Ranallo missed WWE events due to his illness, but has always been able to eventually make a return.

Mistweeting is easy. Owning up to your mistakes should be just as easy but it’s incredibly rare so credit goes.

At this stage it’s clear Mauro Ranallo wants to be left alone. I would hope that that is something that people can respect. #WWE https://t.co/epj37BmYvo

It sounds like Ranallo is doing better and that is great to hear. Hopefully, he will be able to return to WWE soon and that might happen this coming Wednesday on NXT.