Jon Jones recently shared out that he and his coaches had determined that Dominick Reyes is a bigger challenge for the light-heavyweight champ than Corey Anderson. Not surprisingly, the latter disagrees, as does Anthony Smith. 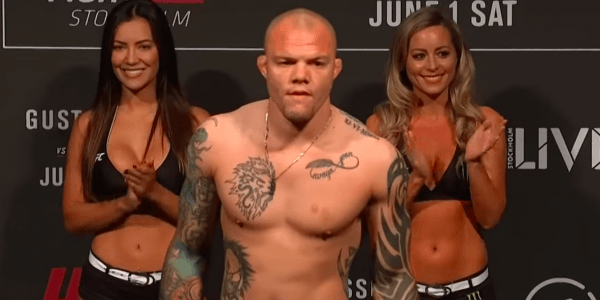 After Reyes put away former middleweight champ Chris Weidman at UFC Boston last month, the 12-0 fighter called for a title fight with Jones. At first, Jones didn’t sound over interested. But more recently, the UFC champ announced he and his coaches had decided Reyes is a more dangerous opponent than Anderson, and that he’s planning to fight him next (and since then,  Jones strongly hinted that he is going to face Reyes in the near future).

Anderson – who quickly put away Johnny Walker at UFC 244 earlier this month – strongly disagrees. In fact, the talented wrestler has argued Jones is choosing “one-dimensional” fighters to face.

Smith recently was a guest on the UFC’s “Unfiltered” podcast. While discussing Jones, and how he matches up against Reyes and Anderson, Smith said this (quotes via MMA Junkie):

“I honestly think Jon probably chose the easier opponent between Corey Anderson and Dominick Reyes,” Smith said. “I think that Reyes is absolutely more dangerous, as far as explosiveness and size and his length. I think he may give Jon some problems on his feet a little bit and Jon will have to dodge some bullets. But look at everybody Jon’s beat – they’re one-dimensional, and that’s what Jon wants.”

“Like we’ve seen in the Volkan Oezdemir fight, Dominick Reyes isn’t necessarily dominant on the ground and his takedown defense isn’t that great,” Smith said. “Even though he was able to stuff some of Weidman’s (takedowns) … he did have some improvements there, but Volkan Oezdemir took him down several times and Jon Jones is a much better wrestler than Volkan Oezdemir, that’s for sure.”

“I think Corey is more well-rounded,” Smith said. “He’s got fundamental boxing. His kicking game isn’t super high level, but he keeps his hands in the right spot. He moves his head well. His wrestling is good. His takedown defense is really good. His top pressure is good. His cardio is phenomenal. Corey presents a lot more problems than Dominick Reyes does, so I do think that Jon picked the easier fight.”

It’s an interesting argument, and it’s certainly true that styles make fights. That said, Jones did get by Daniel Cormier twice, who is one of the best wrestlers in MMA.

Smith, who is coming off a submission win over Alexander Gustafsson in June, lost via decision to Jones this past March.