Nothing has been finalized yet, as far as Anthony Johnson's return to the Octagon. But recently "Rumble" outlined why he believes he can do some damage in the UFC's heavyweight division.

Anthony Johnson has repeatedly said he still wants to fight Jon Jones at some juncture. But, it looks like”Rumble” is initially, planning to wreak some havoc in the UFC’s heavyweight division. 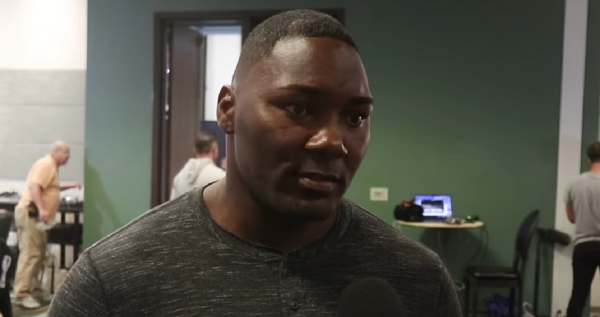 Johnson shocked the MMA world following his submission loss to Daniel Cormier in April, 2017, when he announced he was retiring. At the time, the now 35-year-old said he wanted to pursue opportunities outside of fighting.

Johnson’s latest comments about his return

Well, Johnson was on hand this past weekend at Bare Knuckle Fighting Championship’s latest event. While speaking to The MacLife about his pending return, Johnson reported the following (quotes via MMA Junkie):

“I was trying to shoot for April, May but maybe June, July – we’ll see,” Johnson said. “But whenever I come back, I’m going to make sure it’s going to be known, you know what I mean? I want to come back and showcase everything and just fight – and just hurt people.”

“I’ve dropped (and) knocked out two people already in training on the first two days of sparring, so I feel like everything is clicking,” Johnson said. “My advantage would probably be speed over the majority of those guys because everybody in heavyweight for the most part has power, but I think I’m much faster than those guys and I probably have a little bit more knockout power. Don’t take that from me – just check my record.”

It will be really interesting to see what unfolds here.  Prior to making his UFC return in 2014, Johnson had a lot of success fighting at heavyweight, so it’s certainly nothing new for the feared slugger. It’s hard to argue that he’d have a speed advantage over a lot of heavyweights. So, if his power still translates at that weight, Johnson could make some moves in the UFC’s heavyweight division.

The question is, will the UFC book Johnson to fight, say, a top 15 ranked heavyweight? Or even someone in the top 10? Don’t be surprised at all if they do.