Former UFC light heavyweight title challenger Anthony Johnson believes he can get back to competing at 205 pounds.

And if he is able to successfully run a successful weight cut to get there, “Rumble” wants to challenge current UFC light heavyweight champion Jon Jones.

Johnson, who announced plans earlier this year to return to the UFC after retiring following a loss to then-UFC champion Daniel Cormier, was a guest on Brendan Schaub’s Food Truck Diaries “Below the Belt” series.

“We’ll make it happen if I get low enough,” Johnson said (thanks to MMA Fighting for the quotes). “We’ll fight at 205. That’s a fight I wanted. I think Jon wanted that fight too, before everything happened. That situation, which, it’s over with, it’s in the past. When we see each other there’s no animosity between each other. We show each other love, you know what I mean? But that was a fight, that’s why I went up to 205, man.”

During his career, the 35-year-old Georgia native has competed as low as welterweight and as high as heavyweight. 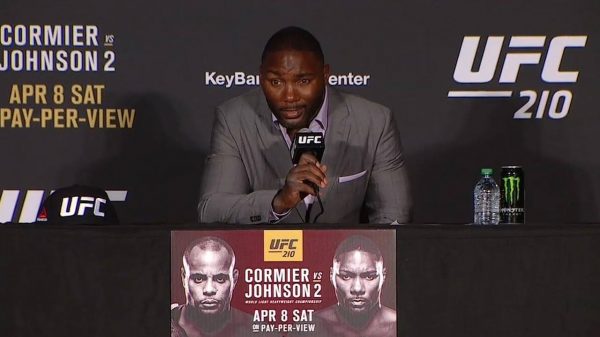 Johnson suffered a second round submission loss via rear-naked choke to Cormier at UFC 210 in 2017 and announced plans to leave the sport. The loss was his second via submission to Cormier for the UFC title.

Between the two defeats, though, he dominated current Bellator heavyweight and light heavyweight champion Ryan Bader, Glover Teixeira and Jimi Manuwa, stopping all three. His win over Bader came in just 86 seconds.

After winning nine in a row from 2012-2015, Johnson was scheduled to meet Jones for the title at UFC 187. Instead, he had his first encounter with Cormier after UFC officials stripped “Bones” of his belt for outside-the-Octagon issues.

Heart Not In It For “Rumble” Vs. Daniel Cormier

.@Anthony_Rumble is willing to make the cut to 205 lbs for @JonnyBones… pic.twitter.com/WQmKTwbTA4

“That’s the guy I want [Jones] and then you know, when I get my heart broken, I have to fight DC, it’s not as motivating,” Johnson said. “The fire wasn’t in me to fight DC but I fought him, kind of fought him, you know what I’m saying, but it wasn’t the same drive.”

Johnson launched a CBD oil company after leaving mixed martial arts and also joined Bare Knuckle Fighting Championship in an executive role. He will need to be in the USADA testing pool before he can return to action inside the Octagon.