Following his quick loss at UFC Boston, it doesn't sound like Chris Weidman is thinking about retiring. But, Dana White says he plans to talk to the former champ about the possibility.

Now that Chris Weidman has been stopped in five of his last six fights, Dana White says he’s going to have a conversation with the former middleweight champ, about his future and the possibility of retirement. 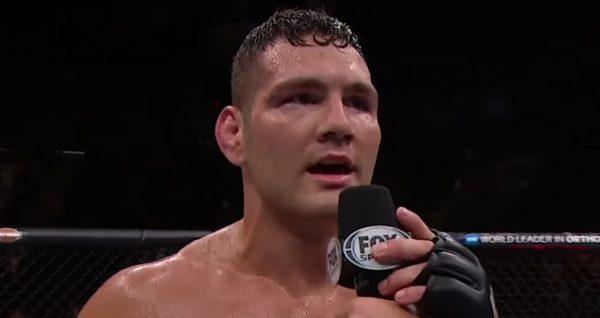 Weidman moved up to light-heavyweight on Friday for a fight with contender Dominick Reyes, which headlined UFC Boston. Weidman was able to take Reyes down shortly into the contest, but he was unable to keep Reyes down. After the latter returned to his feet, he proceeded to put Weidman away with a booming left and follow-up shots.

As noted above, the defeat was Weidman’s fifth in his last six contests and dropped his record to 14-5.

Well, since Weidman is now 35, and because of his recent run of stoppage losses, White was asked to comment on whether the star should retire. The UFC President said this (quote via MMA Junkie):

“What he said tonight didn’t sound to me like he is considering retirement,” White said. “So it’s a conversation he and I definitely need to have. This was his move up to light heavyweight, which obviously didn’t go well for him. So maybe he goes back down to middleweight or he thinks about maybe retiring.”

It will be interesting to see what happens here. It doesn’t sound like Weidman’s thinking about retiring, as after the loss he said he’d be back. Further, leading up to UFC Boston, Weidman talked about how good he felt not having to cut to 185. So, it would be kind of surprising if he reversed course and returned to middleweight.