UFC Champion Robert Whittaker Was ‘Just Tired Of It All’

The reigning UFC middleweight champion admits in an interview with Submission Radio that depression set in and he had to deal with it.

It would seem as if Robert Whittaker has it all.

But like so many around the world, Whittaker was dealing with depression.

The reigning UFC middleweight champion defends his title at UFC 243 later this year against interim Israel Adesanya from Marvel Stadium in Melbourne, Australia. 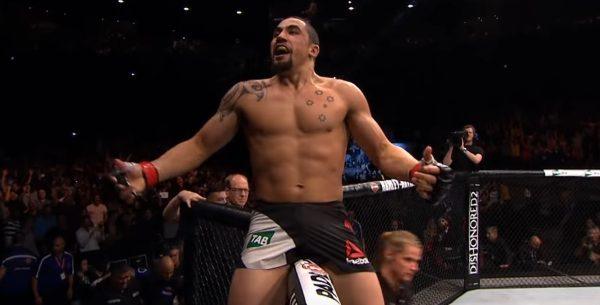 “Depression is real, and it doesn’t matter who you are, you can get depressed and you can feel like you’re falling down a pit of despair,” Whittaker said during a recent interview with Submission Radio. “But it was hard. That camp was very hard for me. Coming back from the injury, being behind in terms of like the goal-setting that I wanted, my markers. I was very behind. Seeing my training partners performing much better than I, and it was a hard time for myself to motivate myself, to keep going, to motivate myself to feel good. I was just… I was very apathetic and didn’t want to do anything. That’s kind of how it is for me. But I did (get over it) and I’m on top of the world now.

“That’s the hardest thing, and there’s no real answer to that. But for myself, what really helped me is obviously the people that surrounded me. You know, being supported by my wife, my kids, the support system I had around myself you know, my coaching staff, my training partners, they all cared for me. And just knowing that they’re there and you can talk to them is very important. Honestly, I just reached a point where I felt that it was either do or die for me. So it was either I had to just start hitting the sessions, I had to get through it, I had to bite down on the mouthguard and just plod along – or not. And the alternative would have been to hang up the gloves, call it in. And I wasn’t ready to do that.”

Whittaker won the interim belt back in 2017 with a decision victory vs. Yoel Romero. He was later promoted to undisputed champion when Georges St-Pierre vacated the title. His first defense was set for 2018 vs. Romero in a rematch, but the challenger missed weight. Related: Robert Whittaker And Israel Adesanya Will Indeed Meet At UFC 243

Instead of pulling out of the bout, though, Whittaker remained and earned a split decision to improve to 20-4 and 9-0 over his last nine bouts.

Whittaker and Kelvin Gastelum were cast on The Ultimate Fighter 28 as coaches with plans for a fight to take place at UFC 234. Whittaker, though, was forced out just hours before the fight to have surgery for an abdominal hernia of the intestine and a twisted and collapsed bowel. Related: Robert Whittaker Releases Statement Following Double Surgery

“It was definitely a blessing in disguise, for multiple reasons. The first reason is like, I got the surgery done when I needed it to get done,” he said. “It was definitely a blessing because I didn’t die (laughs). That’s always a good thing. And yeah, to be able to come back to Melbourne, put on a show they deserve, on a bigger scale, with more anticipation for it, with a training camp that’s honestly a hundred times better for myself personally, yeah, it’s unreal, it’s unreal.”

Hear the complete interview with Whittaker in the video below.

Israel Adesanya’s Mouth Gets Him In Trouble, Offers Apology