Robbie Lawler was decisively beaten by Colby Covington at UFC Newark, but the rugged vet is keeping his head up, following the defeat.

The stats from Robbie Lawler’s bout with Colby Covington on Saturday don’t look so great for the former welterweight champ. But, as we’ve seen in the past with “Ruthless”, the fighter is holding his head high following his one-sided defeat at UFC Newark. 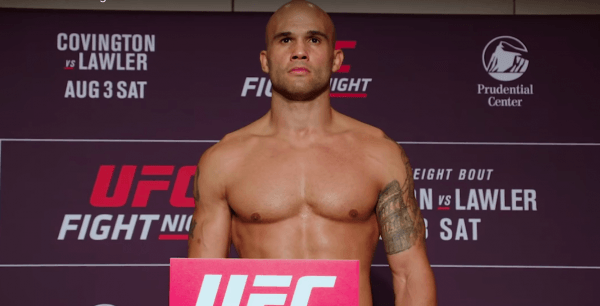 Although Lawler never appeared to be in serious danger from being finished (aside from a couple of choke attempts Covington went for), the dangerous fighter was badly outscored by “Chaos”. Not only did Covington take Lawler down 10 times during the bout, he outstruck Lawler by a 201 to 82 margin. Covington won the bout via scores of 50-45, 50-45, and 50-44.

After the bout, Lawler spoke with the media, and here’s some of what the 37-year-old had to say about the defeat (quotes via MMA Junkie):

“It’s all just a learning experience. I feel like somebody could take that and twist it and say, ‘Maybe he wasn’t right because of this.’ That was the best I’ve been for a while, and I’m going to grow from it.”

It is true that Lawler repeatedly got back to his feet when taken down by Covington, and while the latter scored 10 takedowns, “Ruthless” defended 8 other attempts. The comments above shouldn’t come as a surprise, as Lawler’s always been a fairly stoic, level headed fighter. In other words, during his days as the welterweight champ, it wasn’t like he was known for making ridiculously brash statements.

Now it will be interesting to see what comes next for Lawler. The aggressive fighter has lost three straight, although, his technical submission defeat to Ben Askren was controversial.