Colby Covington Goes On The Attack Against Champion Kamaru Usman

Colby Covington isn't worried about getting the next UFC welterweight title shot over his friend, Jorge Masvidal, calling the duo Batman and Robin.

Colby Covington has no problems speaking his mind. 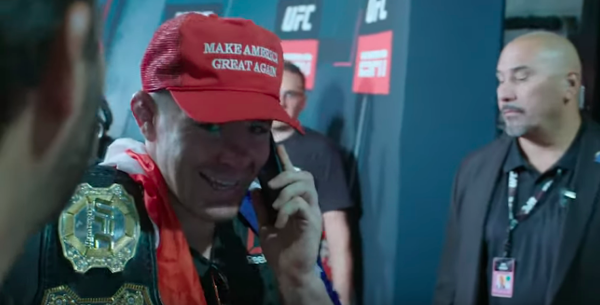 Still, he’ll need to take care of Usman, who Covington told Submission Radio has “negative” in the charisma department.

“The guy’s a piece of shit. I’ve just heard from so many people how he’s so fake and he just acts like he’s some superstar and he acts like he’s better than people. He has no personality,” Covington said. “Literally, Tyron Woodley had more charisma than him. Like, that’s sad. Tyron Woodley has zero charisma, so you know that’s in the negatives for Marty Fakenewsman. So, the guy’s a piece of shit. I mean, he was ducking me so long that Glenn Robinson (who) was his manager, that Glenn Robinson died from it because he was ducking me so hard and wouldn’t fight me.”

Covington, Not Masvidal Next For Usman

The performance helped keep Covington ahead of his friend and fellow top contender, Jorge Masvidal. And while Masvidal might not be happy about needing to compete again to keep his own standing in the division, Covington isn’t concerned and believes he’ll find a suitable opponent – even referencing Conor McGregor.

“He knew that title shot was never his all along. We’re one of the best dynamic duos in the history of MMA, but let’s get it right, we are the Batman and Robin – of course I’m Batman and he’s Robin, but you guys know what I mean,” he said. “He would piece up Conor for sure. No doubt about it. Conor’s too small. He’s a little guy and you know, this and that. So, that’s that, but you know, 170, we’re not talking about that, we’re talking about Marty Fakenewsman and we’re talking about that receding hairline that he has. He’s losing that hairline faster than he’s about to lose that number one contender Power Ranger belt. The guy’s on borrowed time right now, boys.”

Related: Jon Jones Not Feeling The Love For Colby Covington