Germaine de Randamie's stoppage win last night has been labelled as pre-mature by some, but the former champ says referee Herb Dean made the right call.

Herb Dean is taking some flack for stopping last night’s bout between Germaine de Randamie and Aspen Ladd when he did. But, according to the former featherweight champ de Randamie, Dean just saved Ladd from taking more punishment. 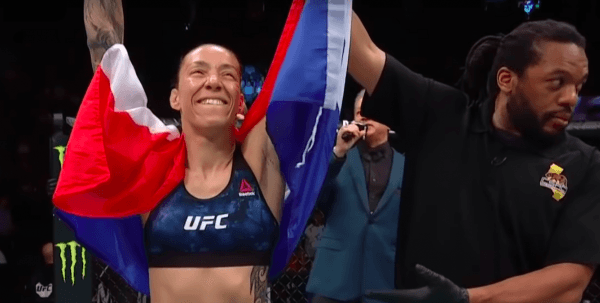 As you’ve likely heard and or saw, de Randamie quickly sent Ladd to the deck with a booming right in the headliner for UFC Sacramento. As de Randamie followed up, Dean jumped and stopped the fight, even though Ladd was on the move.

Well, the stoppage was quickly scrutinized online, but while talking to the media afterward, de Randamie defended Dean’s decision (quotes via MMA Junkie):

“…The thing is, the referee stops the fight, you know?” de Randamie said. “And I understand that the audience might not agree, but it was a clean, clean shot. I landed another one, just because she was on her knees, and Herb was on his way to stop it, and I landed another one. If he didn’t step in, the fight was going to be over anyway because I was going to jump on top of her and finish the fight.”

Would de Randamie have just cracked Ladd with more hard shots? If the fight hadn’t been stopped when it was? It’s certainly possible. Although Ladd didn’t appear to go out, she did look hurt.

That said, Ladd and her team would likely argue she deserved another second or so to try working her way out. Ladd had gone 8-0 in pro-MMA before facing de Randamie on Saturday night.