RAW In A Nutshell: Will Momentum Carry Over For Red Brand?

RAW finds itself coming off of a decent to good PPV. It's time to see what the red brand might due with momentum on it's side now

It’s the start of yet another week, and this one, as every other, starts off for wrestling fans with Monday Night RAW. Hot on the heels of a pretty decent Stomping Grounds last night, it’s time to get RAW moving as the company sets it’s sights on Extreme Rules. So, will the momentum carry over for the red brand? Will we have a big match officially set up for the PPV, coming to us from Philadelphia in July? So many questions are already burning, and we are just twenty four hours removed from the Tacoma Dome show. Let’s crack open this Nutshell and see what happens!

The evening had a few good ones, but the best was AJ Styles versus Ricochet.

That said, as good as it was, WWE ruined it a bit. For one thing, having Gallows and Anderson come down only to be thrown out by Styles? I get it, teasing tension there or whatever the ploy is….but I figured you’d have them cost AJ the match. Or, perhaps we’d actually get a full on Bullet Club run? One can dream.

As it was, the thing I liked least about this otherwise good match was Styles winning clean. I mean, Ricochet did just win the belt, right?  Silly me, thinking they would want to protect the champ.

A couple choices here, nothing crazy.

The “match” between R-Truth and Drake Maverick. I mean, hey, cool, you booked a title defense for the belt that is always up for grabs. Meh. The match was bad. The action that came later was much better. 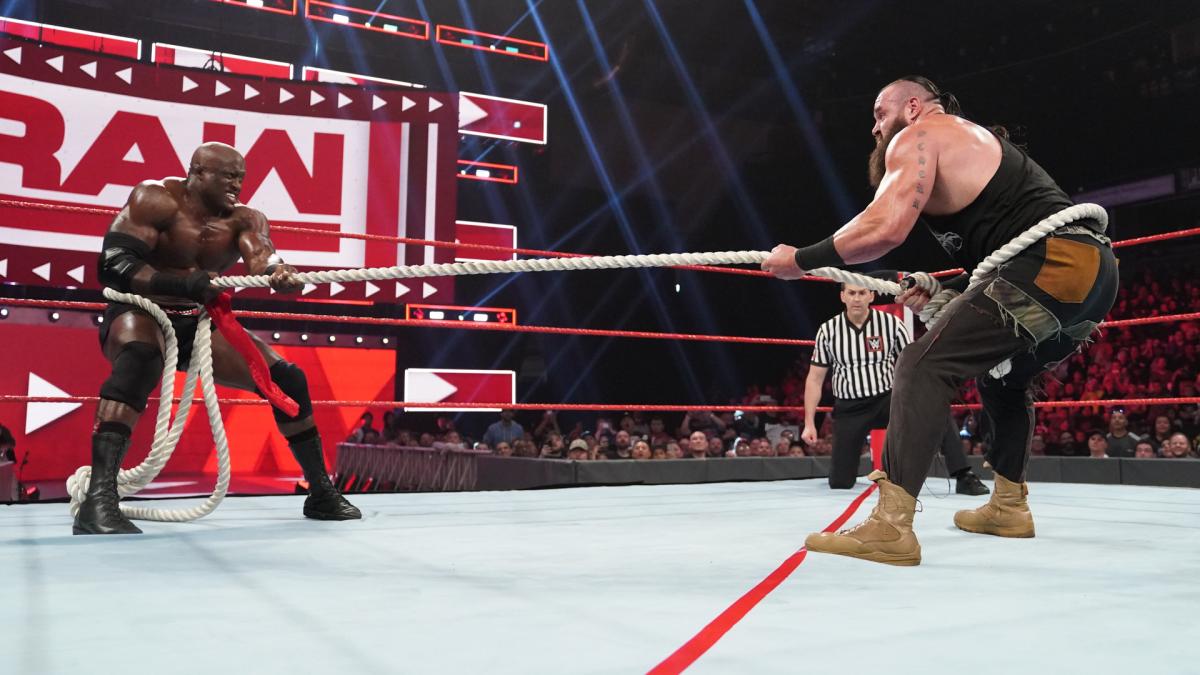 The tug of war between Lashley and Braun Strowman. I hate these kinds of matches, whether it’s a tug of war or a arm wrestling contest or anything. It’s silly, it usually doesn’t do much for a feud, and it puts the guys at potentially high risk for an injury.

The Undertaker stole the show, pretty much. 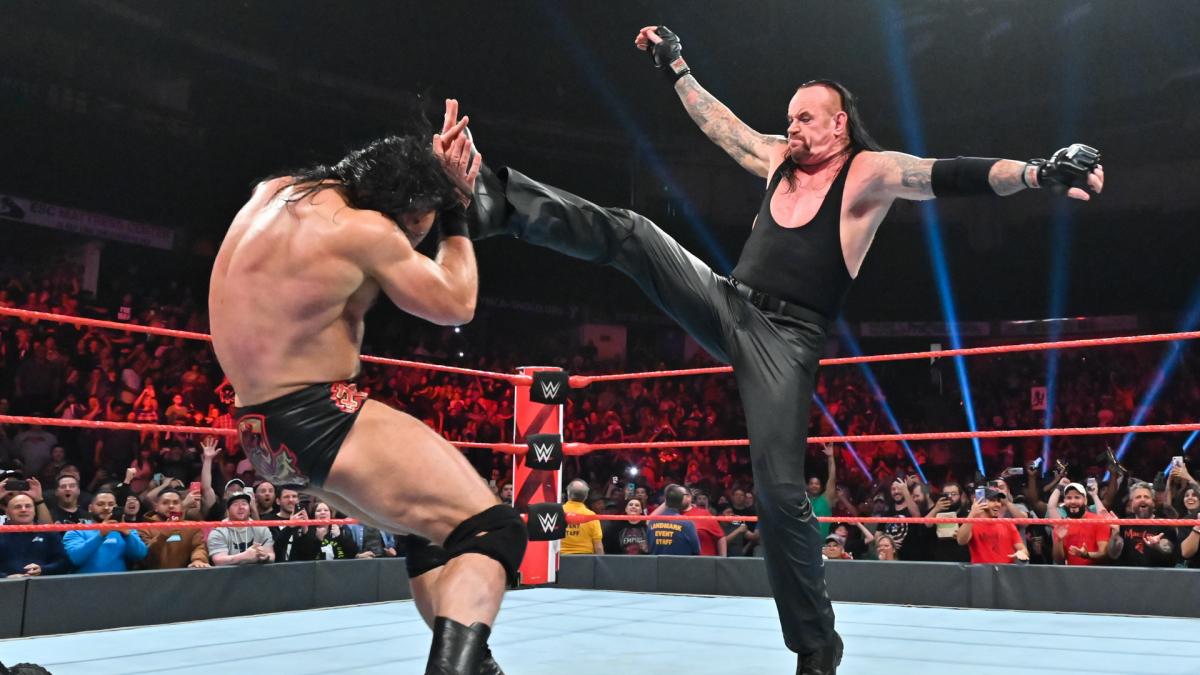 Beyond that, Ricochet and AJ Styles took full advantage of the main event slot.

The Undertaker, catching Shane McMahon by the throat for a choke slam, as McMahon had been attempting to hit Roman Reigns with a Coast to Coast

Some nights, this one is really, really hard to decide. Other nights, it is not a challenge at all.

Tonight it was not a challenge in any way, shape or form.

Oh, sure, I could have gone with Samoa Joe attacking WWE Champion Kofi Kingston. But I am not. 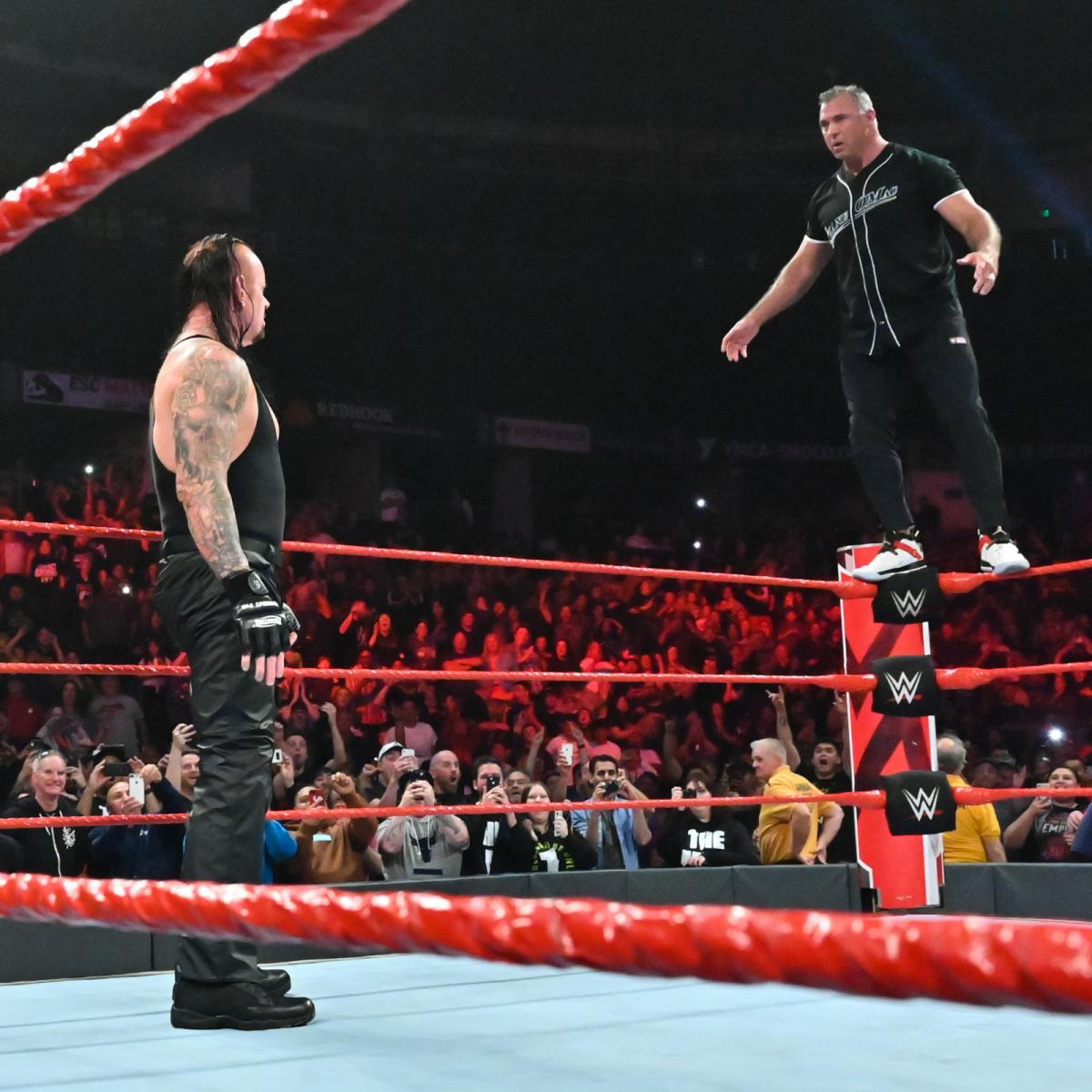 Nope. Instead, this one is all for the surprise appearance by The Undertaker. Roman Reigns was on the wrong end of a two on one beating from Drew McIntyre and Shane McMahon. The gong hit and Untertaker was there, in the ring. Shane leapt into a choke slam and some more typical Undertaker offense.

This was a surprise you have to love, because NO ONE saw it coming. At least, I sure didn’t. If the idea is WWE to have a few truly random surprises so viewers are more inclined to tune in and stay tuned in, then it might just work.

From making the save for Roman, WWE then booked Reigns and The Undertaker against Shane McMahon and Drew McIntyre at Extreme Rules.

Only one that comes to mind is Cole fumbling a line during the 24/7 chaos. He said R-Truth retained, but meant re-gained. 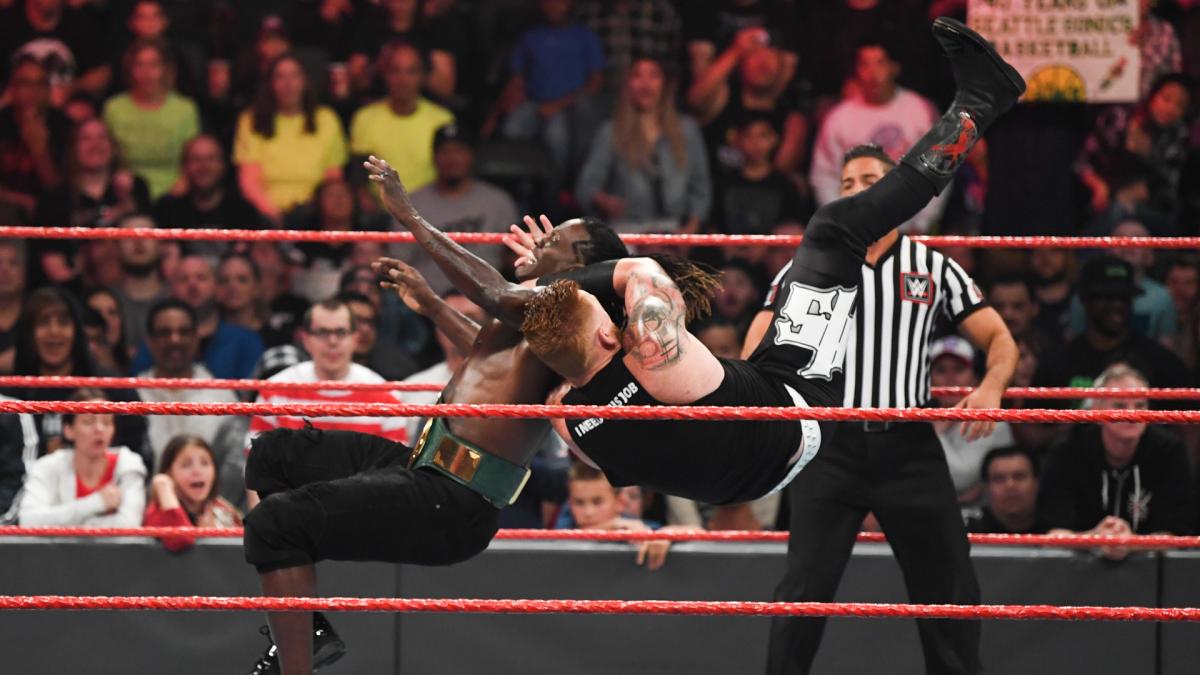 Once again, it’s all about the 24/7 title. I still can’t say I love it, and I am less inclined to say I hate it. The segments are getting entertaining, after all. I mean we saw what, seventeen title changes tonight? OK, so it wasn’t quite that high, but there were several changes in a short span this evening.

The tug of war. I don’t care how much it furthers the feud, I am never a fan of those types of gimmicks.

If ever there was a shred of doubt about what WWE thinks of Ricochet, new United States Champion.

WWE gave him a choice match (albeit non-title) against AJ Styles. The main event on RAW. They had the Universal Champion open the show so that their new US Champ could close it out.

And, oh yeah…The Undertaker is back.

WWE really wants to generate interest, so the surprise return of The Undertaker was a big move.

Seeing Ricochet main event RAW was also pretty surreal, even if they did have him lose.