After crushing Jimi Manuw, Aleksander Rakic made interesting comments about how he thinks he matches up against Jon Jones.

After Aleksander Rakic generated a collective gasp throughout the MMA world, by devastating Jimi Manuwa with a head kick, and the rising light-heavyweight had some interesting things to say about champion, Jon Jones. 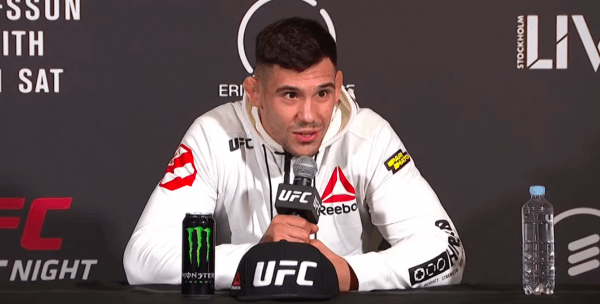 Rakic was booked to face Manuwa at Saturday’s event, after winning his first three fights in the UFC. The 27-year-old lived up to the hype and then some, by taking out the longtime contender with a booming head kick in round one.

Well, with the win, Rakic will likely join fellow rising 205’ers Johnny Walker and Dominick Reyes in the top 15 rankings. Due to what Walker and Reyes have showcased in the Octagon, there’s already been talk about how they match-up against Jones. Following UFC Stockholm, Rakic fielded questions about facing the renowned champion, and the Austrian fighter said this (quotes via MMA Junkie):

“I think to fight for the title I need a couple of more fights,” Rakic said. “I need to improve all my skills because to take a title fight against Jon Jones or someone else, it’s hard. You have to be prepared not 100 percent, you have to be prepared 200 percent and I’m 27 years old. I don’t want to rush. I have plenty of time.

“You can see after every fight in the UFC I’m getting better and better. I don’t want to rush. I have a great team behind me…I need a couple more fights but soon I’m going to get a title shot and the win.”

“I am an all-rounded fighter like him,” Rakic said. “It would be a great fight to fight him. I watch Jon Jones for a long time and I think for now what I can say now is the advantage I have over him is my footwork and my speed on the punches. I think I am much faster than him and I have more power to finish a fight with one punch and the footwork.”

Now, as Rakic alluded to, chances are he won’t be fighting for the belt anytime soon in the near future. While he’s certainly impressed to date, Manuwa was the first top contender he’s faced. So, Rakic will probably need to record a couple more victories before a title shot’s tabled.

But, his take on where he holds advantages over Jones is pretty interesting. Jones has never been a big power puncher, so, Rakic’s belief he hits harder than the champ isn’t too surprising. But, his comments about having better footwork than Jones and being “much faster”, could draw the attention of the champ.

So, it will be interesting to see who the UFC taps to face Rakic next. Could a bout with a top ten ranked fighter be on the horizon?