UFC 237: if Rose Namajunas Retires, She’ll do so at The Peak of Her Powers

Rose Namajunas has raised questions about her possibly retiring, following her KO loss at UFC 237.

Rose Namajunas was non-committal about her future in fighting following UFC 237, and if “Thug” does retire, she’ll do so at the peak of her powers. Yes, even though she lost the strawweight belt by knockout on Saturday night. 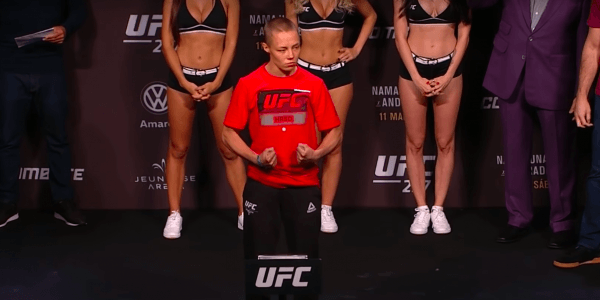 Namajunas faced Jessica Andrade in the main event of the Rio de Janeiro event. The now-former champ bloodied Andrade moments into the fight, and outscored her to win round one. In round two, however, Andrade proceeded to take Namajunas out with a thunderous slam.

“Thug” referred to having pressure taken off of her, in her post-fight, Octagon interview. Then, while speaking to the media afterward, Namajunas didn’t say whether she’d return to the cage (quotes via MMA Junkie):

“I just want to do something else with my life right now,” Namajunas said. “I don’t know. We’ll see. I’m not going to make any decisions right now. I don’t know. It’s just hard to keep having fun with this.”

“I felt a lot of pressure to get back in there. The last fight prior to this one was a lot of emotional baggage and stuff, and then juggling a bunch of different things. I’m still super happy that I came here. It was just an honor to challenge myself against Andrade because she’s a beast and stuff.”

“I was definitely whipping her butt, there’s no doubt about that,” Namajunas said. “We’ll see if I’m still interested in this. I know I can beat her. I just don’t know.”

Now, not surprisingly, these comments are firing around the internet and prompting plenty of discussions. Namajunas has always been upfront about the fact she doesn’t care for the spotlight. So, when you consider the responsibilities, media attention and pressure that comes with being a UFC champ, her comments aren’t that surprising.

But, as Namajunas alluded to, what was clear last night is that she is still an awe-inspiring fighter, in terms of athletic abilities and skills. In the first round, Namajunas was punishing Andrade via her footwork and ridiculously fast hands. Prior to facing Andrade, Namajunas beat Joanna Jedrzejczyk in back-to-back fights, who is one of the greatest female fighters of all time.

So, when you consider this, and the fact that Namajunas is only 26 year’s old, there’s no question that if she retires, she’ll do so as one of the best fighters on the planet. Who knows? Maybe after she’s reminded of this fact in the coming days, it will reignite her passion to fight again.