SmackDown In A Nutshell: Day Two Of The Shakeup

it's the last show of the week, which means the conclusion of the 2019 edition of the Superstar Shakup. After a good RAW, let's see what's next

Hello again everyone! It’s time for our SmackDown Nutshell, which this time around is all about Day Two of the Shakeup. RAW gave us a good bit of movement from the blue brand to the red brand, so fans are no doubt clamoring for similar big surprises to hit the blue brand. WWE has already announced that Vince McMahon will be on SmackDown Tuesday evening to announce “the biggest acquisition in the history of SmackDown Live”. Unlike last week, SmackDown actually does have a tough act to follow this time, so let’s get right to it and crack open this Nutshell!

Honestly, tonight wasn’t heavy on the matches. Given that it was the conclusion of the Superstar Shakeup, a lot of time was spent on, well, shaking up the roster.

That being said, the best match of the evening was likely the men’s six man tag match, giving us Xavier Woods and Kofi Kingston teaming with Kevin Owens, against Cesaro, Rusev and Nakamura.

Don’t get me wrong, it was not a great match…but it was good, and the crowd was into it. 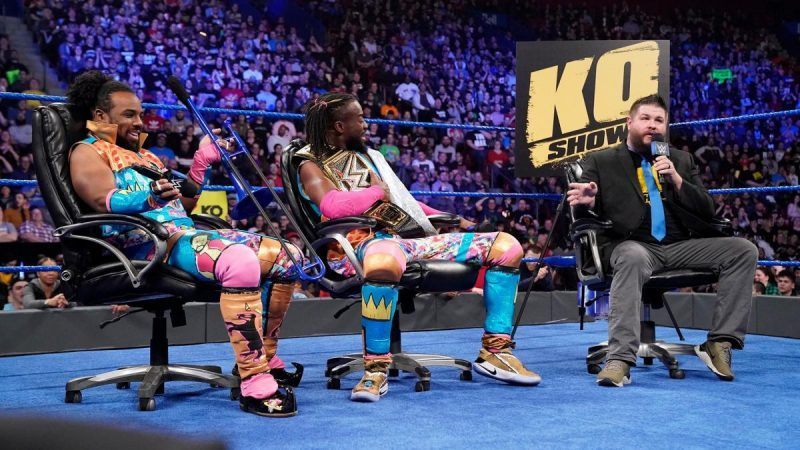 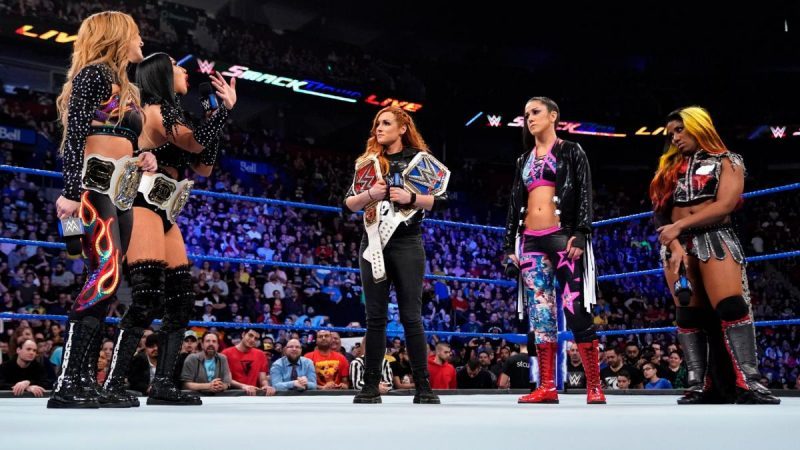 I am not giving this to a match. Rather, the start of the women’s division portion of the evening. Yes, it all eventually got where it needed to be, which was an eight woman tag match. But the setup was a train wreck. Becky came out, then we got two new women on the blue brand-Ember Moon and Bayley-to stake their claim at the next shot. Then we had the IIconics, which brought out Paige, followed by Mandy Rose and Sonya DeVille and then Paige’s actual new tag team, Asuka and Kairi Sane. 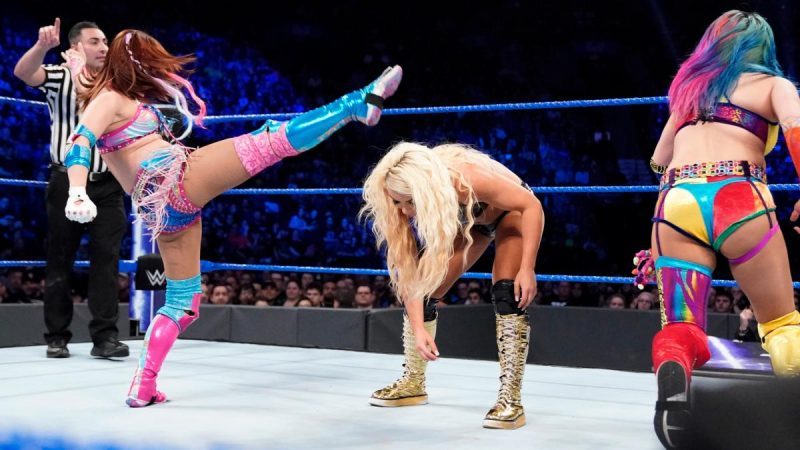 Match was OK. Getting there felt clunky though.

I am going to go with Kevin Owens. In front of his home town fans, he worked his tail off. Nice opening segment, nice job as a fill in for Big E. Was a good night for Owens.

Have to give this one to Roman Reigns, dropping Vince McMahon with a Superman punch 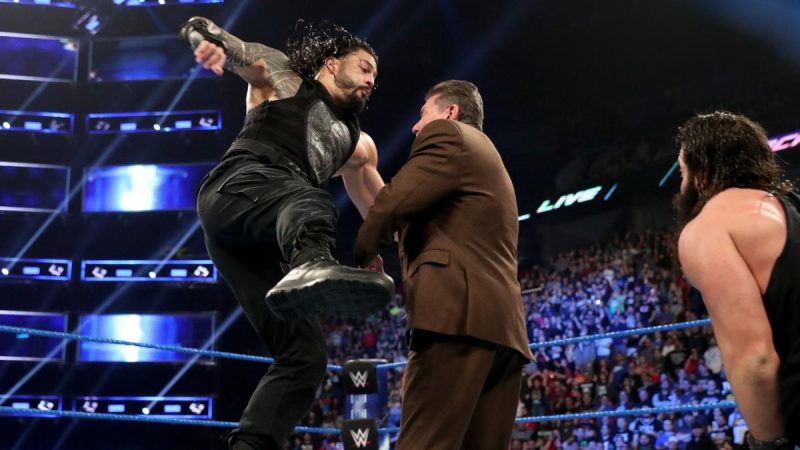 I’d have to go with either McMahon, for being laid out, or to Elias, because the poor guy is just basically a jobber the last few appearances. Sometimes him getting interrupted is fun or interesting (like, who might it be THIS week). But it’s also expected now, so we lost the appeal of the random surprise run in.

Can’t say that I expected Vince McMahon to be laid out via a Superman punch tonight. But that’s basically what we got to close the show. 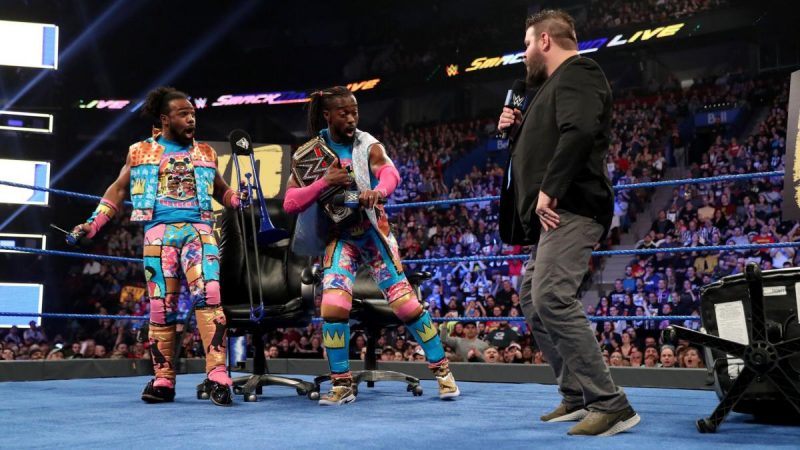 Maybe it’s me, but these moments have seemed to be fading from both shows. Tonight was different though. The Kevin Owens Show segment provided good humor, with Owens showing why they turned him babyface. He’s no Big E, but he did fine in a pinch. He topped off his hip swiveling sequence later by channeling his inner Langston and cranking out the New Day intro.

So, SmackDown looks a bit different now that the dust is settling.

Finn Balor has switched from red to blue, bringing the Intercontinental Championship with him. Now, Samoa Joe is due to hit RAW by all accounts, but Joe was wickedly sick last night, which explains why he did not show up during last night’s portion of the Shakeup.

We got a beefed up women’s division, as the headliners joining the show are Bayley and Kairi Sane, with Ember Moon returning from injury (though we saw her at WrestleMania).

The evening was capped off by the addition of Elias, but that was topped off by Roman Reigns.

It was a bummer to once again see no Sasha Banks

It was similarly a bummer to not see the Sky Pirates. Asuka and Kairi Sane isn’t a bad consolation prize, I think, but it also wasn’t as big a deal as it was made out to be.

Also, a point to be made here…last night, War Raiders hit the main roster, but now they are called Viking Experience-perhaps the worst tag team name in WWE history. But tonight, WWE commentators were calling Ember Moon the “war goddess”.  If one is verboten, both should be (though I am in the camp of both should be fine).

Not a fan of no Undisputed Era. That group, in its various iterations, is beyond ready to show up. Now either WWE is holding them for their next ratings lull….or they haven’t a clue. I honestly expected them up before War Raiders though.

Overall, not a bad show. RAW once again felt like it had the bigger surprises, but I honestly am convinced that’s more because it goes first than anything else. Maybe in a year, when one is on Monday and the other on Friday, that separation might help in that regard.

Not a bad show, most of the flow worked, though I thought the women’s division segment floundered for at least some of it. Just too many parts moving, but the parts heading to the blue brand are impressive.

So, for the most part, things are settled. I still expect some additional shifting (specifically, Samoa Joe to end up on RAW, and possibly something more with New Day whenever Big E is back, and obviously Lars Sullivan will eventually have to find a home, right?), but it was an interesting Shakeup.

The red brand got loaded in the tag team division-perhaps NOW we will see this much-discussed, often-rumored tag team push? I’ve said it before, but they ought to consider a 205Live-esque treatment here (but back when 205Live was beginning). Let the tag teams work RAW/SmackDown, but have them get their own hour long weekly show (or maybe more than an hour) on WWE Network. Network needs content, there’s your content.

Blue brand beefed up the women’s division for sure. While you don’t have a dedicated title, you do have Charlotte Flair at the top.  Bayley, Ember Moon and others joining SmackDown means it just got a whole lot more competitive.