There is expected to be a major announcement on RAW about the WrestleMania 35 main event. Also, Takeover New York might be getting a ladder match.

– With five matches booked for NXT’s Takeover New York, the card is likely complete. In hyping the show, WWE uploaded the following photo and if you look closely at the women, there are several ladders next to various buildings. This has led to speculation that Shayna Baszler vs. Bianca Belair vs. Io Shirai vs. Kairi Sane will be turned in to a fatal four-way ladder match. 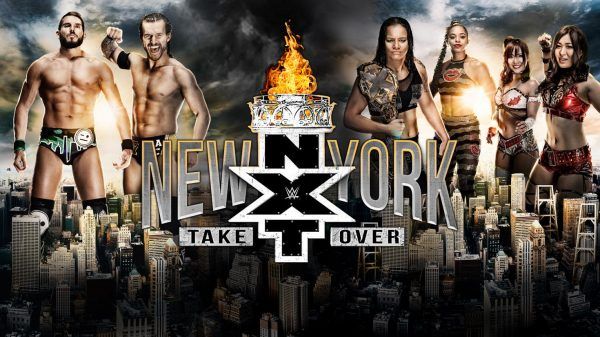 There is only one episode of NXT left to air before Takeover and there was no mention made during the tapings of a ladder match. Of course, WWE could add the stipulation in a segment that was taped in the backstage area.

Ladder matches involving female superstars are pretty rare in WWE; with the Money in the Bank Ladder Matches being the exception. As for NXT, ladder matches there are even more rare. Looking back at the history of NXT, there does not appear to be any accounts of their female wrestlers taking part in a ladder match.

We should know by Wednesday night or early Thursday if the fatal four-way will be turned in to a ladder match.

– Last week was shocking as Charlotte Flair defeated Asuka to once again become SmackDown Women’s Champion. With Charlotte already taking on RAW Women’s Champion Ronda Rousey and Becky Lynch in the main event of WrestleMania 35, it seemed like adding another title was extra. Dave Meltzer mentioned on Wrestling Observer Radio how WWE has a major announcement set for tomorrow’s RAW.

Becky is the fan favorite heading into the historic match, but you never know with WWE. Rousey is believed to being taking a hiatus after the show, yet WWE could throw a curveball and have her win. This would be similar to how Brock Lesnar retained the Universal Championship last year, as only a few people knew and it was total shock to fans.