John Wayne, friend to Maureen O'Hara, was a no-nonsense guy and he knew the quickest way to teach a boy to swim in the 1953 Warner Brothers classic 'Hondo'.

John Wayne was a no-nonsense guy and he played no-nonsense characters. He was also an American patriot and beloved friend of iconic redhead Maureen O’Hara. In Hondo, John Wayne served up a memorable moment along with an invaluable life lesson when he met a boy who couldn’t swim.

In the 1953 Warner Brothers classic Hondo, John Wayne saw a boy who didn’t know how to swim. He quickly solved that problem by having the boy face his fears – head on.

Back in the good ol’ days, simple problems required simple solutions. If you didn’t you know how to do something, the best (and fastest) way to learn was throwing yourself in the deep end.

In this instance, quite literally.

The boy’s mom arrives on the scene concerned for her son’s safety. How does the Duke reply?

Check out the mom’s face when she comes down to find her son in the river. What would today’s liberals say?

Those of us who have been around many decades can certainly relate to this parenting style. Anyone else remember getting thrown into the water by a parent?

The character that Wayne embodied is something that’s sorely missing in modern Hollywood and American culture.

Wayne is not just a Hollywood legend but also a great American patriot. He broke the mold and there will never be another quite like him.

RELATED: John Wayne Shocked Everyone When He Sang With Dean Martin

Hollywood movie legend Maureen O’Hara was close friends with Wayne. They starred together in five films and knew each other for over 39 years.

The famous redhead made an emotional plea to Congress just weeks before he died. She said, “To the people of the world, John Wayne is not just an actor — and a very fine actor — John Wayne is the United States of America.”

O’Hara wanted the people to know John Wayne the man – not just the actor. He was a man with a deep love for his family, his home, and his country.

Her emotional testimony concluded with, “I beg you to strike a medal for Duke, to order the President to strike it. And I feel that the medal should say just one thing: ‘John Wayne, American.'”

And so they did.

A special commemorative coin was minted in 1979 emblazoned with ‘John Wayne American’. The bronze coin was authorized on Wayne’s 72nd birthday, May 26th, 1979, less than three weeks prior to his death.

As a token of respect, the US Mint also fashioned a single gold coin that was presented to Wayne’s family. 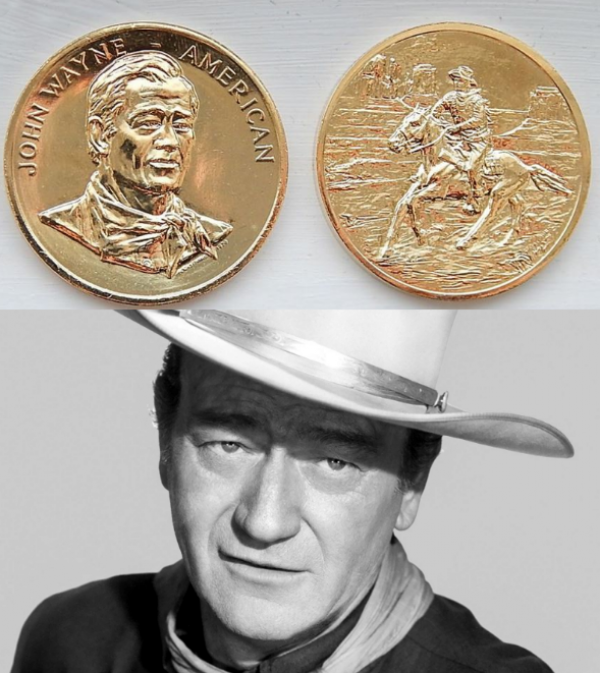 READ ALSO: John Wayne Under Fire From Liberals Over Comments He Made 40 Years Ago

Character as demonstrated by Wayne is what legends are made of. The man had grit and I’ll take his no-nonsense approach over today’s helicopter parents any day!

Being scared is never an excuse. Facing our fears is precisely how we all learn and grow. The Duke knew kids don’t learn by coddling them!

Please share this if you are a John Wayne fan!

Dr. Who Star Jodie Whitaker States That Her Parents Raised her “Gender Neutral Before It Was Even Considered A Thing”