Millions of people are praying for Damar Hamlin, the 24 year-old Buffalo Bills safety who collapsed during a game last night.

The world was shocked last night when the Buffalo Bills safety Damar Hamlin collapsed on the field during the first quarter of his team’s game against the Cincinnati Bengals. Since then, millions of prayers have been coming in for Hamlin as he remains in critical condition.

The @BuffaloBills know who to call out to for help! The team dropped to their knees in a circle of prayer after Damar Hamlin was taken away via ambulance. They knew that he needed help that only God can give. Today, millions of people continue to pray for him—& I'm one of them. pic.twitter.com/fgofDSC3KN

ABC News reported that Hamlin, 24, suffered a cardiac arrest on the field and remains in critical condition in the intensive care unit at the time of this writing.

“Damar Hamlin suffered a cardiac arrest following a hit in our game versus the Bengals,” the team said in a statement. “His heartbeat was restored on the field and he was transferred to the UC Medical Center for further testing and treatment. He is currently sedated and listed in critical condition.”

Damar Hamlin suffered a cardiac arrest following a hit in our game versus the Bengals. His heartbeat was restored on the field and he was transferred to the UC Medical Center for further testing and treatment. He is currently sedated and listed in critical condition.

The game was suspended after Hamlin collapsed, and the NFL issued a statement today saying that it will not be resuming this week.

“The NFL has been in constant communication with the NFL Players Association which is in agreement with postponing the game,” the league said. 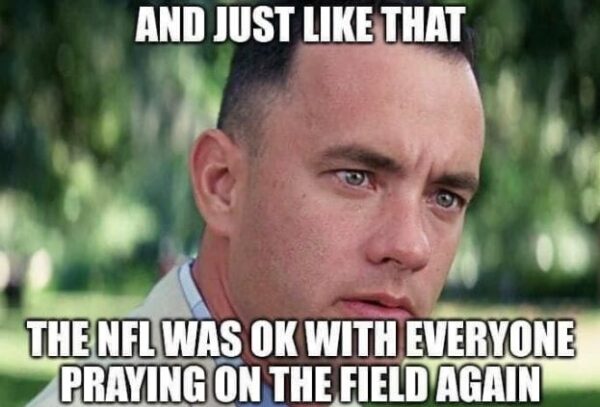 Hamlin’s Family Thanks Public For Prayers

Fox News reported that Hamlin’s family has released a statement thanking the public for all the prayers that are coming in.

“On behalf of our family, we want to express our sincere gratitude for the love and support shown to Damar during this challenging time,” the family said. “We are deeply moved by the prayers, kind words, and donations from fans around the country.”

“We also want to acknowledge the dedicated first responders and healthcare professionals at the University of Cincinnati Medical Center who have provided exceptional care to Damar,” the family continued.

“We feel so blessed to be a part of the Buffalo Bills organization and to have their support,” they concluded. “We also want to thank Coach Taylor and the Bengals for everything they’ve done.”

A statement from the family of #Bills S Damar Hamlin, via @jordonr: pic.twitter.com/VolSLMraUN

Prayers For Hamlin Pour In

Prayers have indeed been pouring in for Hamlin on social media ever since his collapse:

Join us to pray for Damar Hamlin today at 3 at the Bills Store at Highmark Stadium. If you can’t join us in person, join us in spirit & lift him up wherever you are.
There is power in a community that prays. #prayfor3at3 #buffalove #powerinprayer #biggerthanfootball pic.twitter.com/USbAFPdBls

Damar Hamlin represents every one of us and every teammate we've ever had. I've never met him, but I know him as a member of our brotherhood. My family and I pray for him and his family as he recovers. God be with him.

I know all us football fans are praying for Damar Hamlin, and let’s all please pray for Tee Higgins as well. He is hurting especially along with all the players who were on the field, God bless you ALL🙏🏼

In a truly beautiful gesture, fans have also raised over $4 million for a GoFundMe that Hamlin previously started to raise money to buy toys for needy children. ESPN reported that the fundraiser had only raised $2,921 last month, but at the time of this writing, it’s raised $4,384,100.

Hamlin launched the fundraiser back in December of 2020, saying that he wanted to have a toy drive at Kelly and Nina’s Daycare in his hometown of McKees Rocks, Pennsylvania. At the time, his goal was only to raise $2,500.

In 2020, at the end of his final year at Pitt, Damar Hamlin organized a toy drive for kids in his hometown of McKees Rocks, Pa. This is the young man who went down on the field tonight in Cincinnati. He is a man; not a number on a jersey. Prayers for Damar. pic.twitter.com/mSa80YklRK

“As I embark on my journey to the NFL, I will never forget where I come from and I am committed to using my platform to positively impact the community that raised me,” Hamlin wrote when he set it up.

“I created The Chasing M’s Foundation as a vehicle that will allow me to deliver that impact, and the first program is the 2020 Community Toy Drive,” he continued. “This campaign gives you the opportunity to contribute to our first initiative and positively impact children who have been hardest hit by the pandemic.”

Watch Hamlin talk more about this toy drive in the video below.

While this is obviously a very tragic situation, the one positive side to it is seeing the world come together to pray for this amazing young man. As Christians, we all know how powerful prayer can be, so let’s use it to make sure that Hamlin is healed from this unfortunate medical emergency!